There’s no car in the world quite like the Mercedes McLaren SLR Roadster... 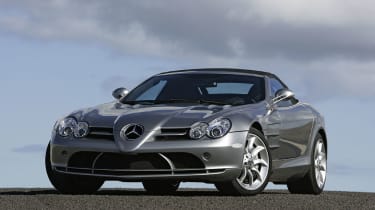 There’s no car in the world quite like the SLR Roadster. Its acceleration is immense, its soundtrack incredible and its price-tag almost unbelievable. Quite why it costs £33,000 more than the Coupe, we can’t understand. Still, the folding roof works brilliantly and performance is just as impressive as the Coupe. That said, though, it’s not a pure driver’s car like Pagani’s Zonda, but as a visual statement, it takes some beating.

The Mercedes McLaren SLR Roadster is without doubt the ultimate incarnation of the incredibly powerful Mercedes drop-top.

Carrying a price tag of £350,000, a 626bhp 5.5-litre supercharged V8 and a 207mph top speed, it’s the most expensive and fastest convertible the firm has ever produced.

And as the Roadster will be the only SLR variant to be produced at McLaren’s Woking factory this year, it effectively replaces the Coupe too. So can it offer even more appeal?

Featuring a classy fabric hood the Roadster looks just as striking as its Coupe brother. Requiring a manual twist of a lever to release, the hood folds away electrically in less than ten seconds.

Structural changes include A-pillars reinforced with steel and two fixed roll-over bars. Top speed is 207mph (roof-up) and as you’d expect, acceleration is shattering. With the roof-down, more of the V8’s roar and supercharger whine enters the cabin too.

Roof-up rear visibility is poor though, and as it’s very wide, the SLR is difficult to place. The ceramic brakes also take some getting used to as the pedal lacks feel. Grip is impressive though – the Roadster spears into corners and slingshots around them.

With dull, heavy steering the SLR lacks the finesse of rivals like Pagan’s Zonda. But it’s still an amazing machine and price-tag aside, even more appealing than the Coupe.