There isn't a soul in sight as we pull the wraps from the first-ever production SLR to hit the road. 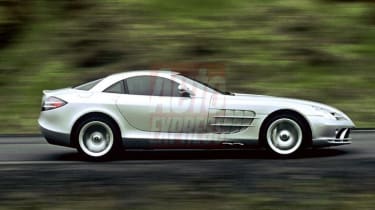 Devastatingly expensive, hugely powerful and vastly competent, the SLR offers sensory overload to anyone rich or brave enough to take the wheel. It's a sensational creation, although we think plans to sell 3,500 are ambitious - even if this is one of the most amazing cars we have driven this year.

There isn't a soul in sight as we pull the wraps from the first-ever production SLR to hit the road. Free from its disguise, the car is a sensational piece of sculpture - although the eerily quiet surroundings are in sharp contrast to the packed motor show stand at Frankfurt where our SLR's sister was unveiled.

The flashlights and masses of showgoers that are surrounding the McLaren Mercedes in Germany seem a long way from the desolate countryside of Iceland. Clouds of steam, and miles of pipework from the country's hydro-thermal power stations, are the only witnesses to this exclusive first drive.

We're accompanied by Chris Dwyer, a McLaren employee whose job it will be to fly anywhere in the world at short notice to repair SLRs that have broken down or been involved in an accident. And while Mercedes does not expect him to be rushed off his feet, having a mechanic on 24-hour standby shows the firm's commitment to its customers.

Priced at £250,000 and offering a staggering 617bhp, there's no room for error, and Chris drives the car first. The SLR key is slid into the ignition, and the starter button - hidden behind an alloy door in the top of the gearlever - is pressed, causing the vehicle to settle to a well mannered idle, growling through its distinctive side-exit exhaust pipes. Supercar fans expecting an explosion of noise and vibration will be sorely disappointed. Despite the involvement of McLaren - builder of the F1, the world's most extreme sports car - the SLR is clearly a Mercedes.

First gear is engaged in the automatic box, and the car strains against the huge carbon ceramic brakes. With 780Nm of torque, acceleration is awesome, and Chris talks us through the figures. "The 0-60mph sprint takes 3.8 seconds, while 0-120mph needs 10.6 seconds," he said. "With enough space, the car hits 180mph in 28.8 seconds. Officially, the SLR's maximum speed is 208mph, but this has been exceeded on several occasions. As a precaution, the speedometer reads to 225mph."

The winding, soaking wet roads are hardly an invitation to put such claims to the test, but Chris doesn't waste any time in opening up the 5.5-litre supercharged V8. With traction control systems on, wheelspin is eliminated and the SLR generates huge levels of grip. You get squeezed back into the bucket seats as the car accelerates. With the throttle flat to the floor, you can literally feel the power being generated in the all-alloy block. Gearchanges are smooth but, in a nod to sportiness, it's down to the driver to decide the shift point.

When used hard, the brakes will rip off speed in big chunks, and Chris assures us that they are among the most powerful available. As we're brought to a halt, there is little disagreement. Controlled by Mercedes' electronic braking system, the big carbon composite anchors slow us down quickly and efficiently. They're immediately responsive and prove virtually effortless to use.

Now it's our turn to take control, and the tantalising prospect of hitting the road at the wheel of one of the world's most desirable sports cars becomes reality. Despite the huge cooling vents in the carbon fibre bonnet, a heat haze dances over the silver paintwork and distorts the view of the road ahead. But while first impressions count, they don't always tell the whole story.

Although the SLR's interior is extremely snug - head and legroom are at a premium despite the car's length - the driving position is fairly comfortable. All that power is transmitted to the road through a five-speed automatic transmission, which also features in the luxury Maybach limousine.

In this car, drivers can use the Tiptronic function, or leave the box, which is equipped with the AMG speedshift system, to take care of itself. Despite the fact that so much power is being delivered to the rear wheels, the slick unit is never flustered or taken by surprise. The SLR's tyres have also been specially designed to handle the power output. The 18-inch wheels are shod with huge 245/40 section rubber at the front and 295/35 at the rear. And even with the phenomenal brakes, it's good to know that one of the most advanced traction control systems, Mercedes' ESP, is working away to ensure the car follows the line that the driver intended.

If it does all go wrong, however, the SLR has to be one of the safest vehicles in which to have an accident. Built using Formula One-standard composite materials, the engine and front suspension are supported on two huge carbon outriggers which are effectively the same shape as the nose of an F1 car. In a head-on impact, the cones telescope inward as they disintegrate, absorbing vast amounts of energy.

The set-up also provides impressive chassis rigidity, endowing the SLR with extremely reassuring handling. What's more, the newcomer is beyond being merely fast. Awesome speeds are achievable just about anywhere, whatever the conditions. Thankfully, the Mercedes is extremely user-friendly, too. In fact, think of it as being like a super-quick version of the SL. You'll need to push really hard to make the car understeer through corners, but even if you do manage to break the tyres' grip, you'll find that there are no unpleasant vices.

Even when switched off, the traction control continues to monitor and adjust the throttle and brake inputs, keeping the car stable. After only a few minutes, it becomes obvious that the SLR is a really special machine, and one that is guaranteed to attract lots of attention.

True, £250,000 is a lot to pay, but you can tell where more or less every pound has been spent. This attention to detail is unrivalled, from the side-exit exhausts to the heat vents which surround the bonnet, and even the engine bay and boot. There isn't a part of this amazing car that doesn't seem to have been painted and polished. Maybe it's a bit over the top, but any driving enthusiast can't help feeling impressed.

McLaren has already started production, and is currently building two models every day. Eventually, numbers will increase and Mercedes hopes to make a total of 3,500 examples. This is hardly limited-edition stuff, but the SLR is still highly exclusive.

Will enough people buy such a car, though? Perhaps the answer lies with Chris. His technical work means that he knows the SLR's every nut and bolt - and is prepared to drop everything at a moment's notice to attend to the machine's every need. That level of attention could be enough to clinch it for some.