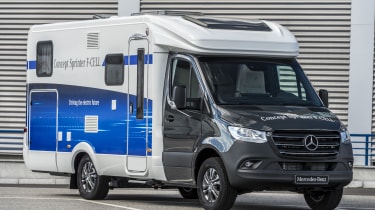 Mercedes has revealed a new showcase for its F-CELL hydrogen technology in the shape of the Concept Sprinter F-CELL camper van. The study is based on the tractor head variant of the latest award-winning Sprinter van, and is fitted with a standard camper van conversion body over a hi-tech drive system.

The technology in this special Sprinter is a development of that already seen in the Mercedes GLC F-CELL, and like that model, power comes from a fuel cell stack that sits under the bonnet where the diesel engine would normally be. The electricity it makes is then sent to the rear-mounted electric motor and transmission, which makes 197bhp.

Where the Sprinter F-CELL differs from the GLC version is the amount of hydrogen it can carry. There are three tanks under the floor and a fourth at the rear, which combine to allow it to carry 8.4kg of hydrogen, giving this camper a potential range of 310 miles of zero-emissions driving. The Sprinter F-CELL also has a battery pack - similar to the one found in the forthcoming eSprinter, which can give an extra 19 miles of range.

Another benefit of the hydrogen fuel system is that users will no longer need to find an external power supply to power the mod cons usually found in a camper van. Instead, the electricity used to drive the Sprinter can also be used to power the fridge, cooker and heat water for an on-board shower. That means users will no longer find it necessary to pitch up in a campsite and struggle with extension leads to get power to their mobile home.

Of course, the big issue with the Concept Sprinter F-CELL is to do with the lack of infrastructure to go with its hydrogen fuel cell technology. With less than a handful of filling stations in the UK, this camper will be a niche choice, if Mercedes decides to put it into production.

Will hydrogen powered campervans ever catch on? Let us know your view in the comments...

The pure-electric Mercedes eSprinter is available to order now, with a starting price of £51,950 and a maximum range of 96 miles
New Torsus Praetorian School Bus is £330,000 off-road specialist