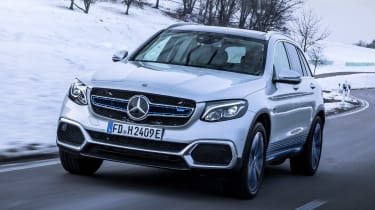 Hydrogen fuel-cell vehicles are still few in number - and the infrastructure supporting them is pretty patchy. But that’s not stopping major manufacturers from pushing ahead with the technology that can fuel a car and emit only water. And we’ve been to Stuttgart for an early ride in the latest arrival on the market: the Mercedes GLC F-CELL.

This isn’t the first fuel-cell Mercedes, but it demonstrates the sort of gains the German manufacturer is making in the area. The GLC’s overall powertrain is about 40 per cent more powerful than the set-up in the previous offering, the B-Class F-CELL, but it uses 90 per cent less platinum. And that makes it considerably cheaper.

Not that price will be bothering British customers. Because for now at least, Mercedes has elected to not offer the GLC F-CELL in its UK dealerships. It’s available in continental Europe now, though, and it has been engineered for right-hand drive because of the burgeoning market for fuel cells in Japan.

The GLC F-CELL uses a pair of hydrogen tanks below the floor, each protected by a carbonfibre shell and pressurised to 700 bar. That means that refuelling takes about the same time as a normal petrol or diesel vehicle - around three minutes. And brimming the GLC F-CELL will give you up to 437km of range, or 272 miles. You can also plug the car into a wall socket, topping up a lithium-ion battery pack that’s big enough (9.3kWh) to allow around 30 miles of that range without using a drop of hydrogen at all. The connection is via a flap, positioned on the rear bumper. 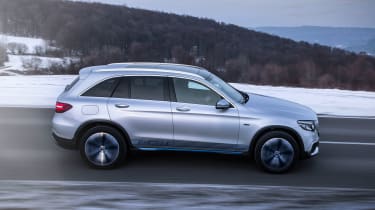 The fuel cell ‘stack’, mounted under the bonnet on the same fixing points as a petrol or diesel engine, turns the hydrogen into electricity by mixing it with oxygen, and feeds this, through the battery, to power a 197bhp electric motor on the back axle that has 350Nm of torque and is capable of taking the GLC F-CELL to a top speed of 100mph. There’s no four-wheel drive, then; this is a rear-drive SUV only. And the whole package is about 100kg heavier than a normal GLC.

Confused? There’s no need to be. Because on the move, the F-CELL just feels, well, like any other pure-electric vehicle. There are a few telltale signs in the front of the cabin; there’s a switch down near the car’s COMAND infotainment controller that cycles through the modes. And the digital instrument panel has a new look and a different fuel gauge that shows both the amount of hydrogen in the tanks and the current level of battery charge.

But that aside, it appears to be little more than a case of sticking the column-mounted gear selector into D and getting on with it. A Mercedes engineer is at the wheel as we travel on a 20-mile loop from the firm’s R&D centre near Stuttgart, and while he switches through the different modes, it’s genuinely difficult to tell the difference from the passenger seat.

There’s a bit more electric motor whine from the ZF-sourced unit than you might expect - and, perversely, less of the distant gurgling from the fuel cell stack than we’ve sensed in the Toyota Mirai and Honda Clarity, the two rivals for the F-CELL that we’ve tried most recently. It’s refined at a cruise, then - although the suspension and brakes have had to be beefed up to cope with the car’s extra mass, and the overall set-up manages to feel both stiff and heavy on the move. British roads would do it few favours, we suspect. 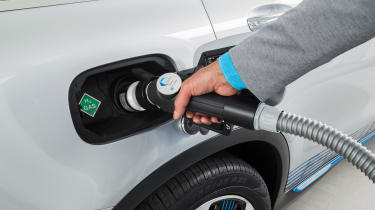 The GLC F-CELL gets a few styling mods to make it stand out from its petrol and diesel stablemates. There are different alloy wheels and some blue detailing on the sills and rear bumper.

There’s a bigger giveaway inside, though, because the boot capacity is reduced to make room for one of the hydrogen tanks and the battery pack (the floor is raised, as it is in Merc’s GLC 350e plug-in hybrid), The rear seat also sits slightly about 40mm higher than normal, cutting a few millimetres off the available headroom - and six-footers will notice the difference.

The end result is a car which, like the Mirai and Clarity before it, plus Hyundai’s latest NEXO, does a good job of illustrating how effective a fuel-cell vehicle can be. Put aside the minor compromises on practicality and this GLC feels like a car you could happily use every day, as you would a conventionally powered model.

However, it is also another example, sadly, of how car technology has moved on more quickly than the infrastructure required to support it. And while Mercedes and a few partners are making big inroads into a plan to introduce a hydrogen fuelling network with cross-country coverage in Germany, the UK lags behind this. As long as this remains the case, it’s hard to argue with Mercedes’ decision to not offer the car here.