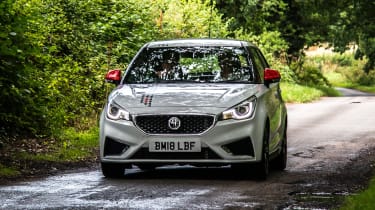 The MG3 supermini has received a substantial facelift for 2018 with a completely new look inside and out, and it’ll be on sale in MG UK showrooms this September.

On sale in Britain since 2013, the Chinese owned firm’s rival for everything from the Dacia Sandero to the Ford Fiesta remains positioned as a highly affordable offering relative to other superminis in the popular B-segment, with the most basic version priced from less than £10,000.

With MG having confirmed that an all-new MG3 will arrive in 2022, four years of life are left in the current-generation car. The design has been completely overhauled to suit the brand’s latest look, with an octagonal grille lifted from the new ZS crossover headlining the front end. It’s flanked by brand new LED headlights, and there’s also a new front bumper complete with angular and sporty vents.

Elsewhere around the car new side skirts appear and there’s a fresh rear bumper too. A new 16-inch alloy wheel is offered, while plenty in the way of customisation options exist – six paint colours, colour contrasting wing mirrors, plus roof and bodywork graphic packs are available.

Continuing the extensive overhaul, the cabin is all-new. The design has been completely reconfigured to be much more modern in appearance and centres around the arrival of a new eight-inch touchscreen infotainment unit, equipped as standard on mid-range Excite and Exclusive models.

The unit is MG’s latest and the same one fitted on the ZS, though navigation isn’t available. Apple CarPlay is standard fit, but Android Auto is not included. Also taken from the ZS is the new multifunction steering wheel. Bootspace remains at 285 litres with all seats in place and no spare tyre.

Compared to the design changes, mechanical revisions are limited. The MG3 is still powered by a 1.5-litre four-cylinder naturally aspirated petrol engine developing 105bhp and 137Nm of torque, though it has been tweaked to meet Euro 6D emissions regulations. Power is sent to the front wheels through a five-speed manual gearbox, with 0-60mph coming up in a claimed 10.4 seconds and a top speed of 108mph. MG claims 47.1mpg and 140g/km CO2.

When it arrives on sale in Britain this September, buyers will be offered three trim levels. The basic Explore car starts from £9,495 and goes without the new infotainment system. Standard equipment on this car includes body coloured bumpers, LED headlights and LED daytime running lights, electric mirrors, a four way adjustable driver’s seat and fabric upholstery.

Step up to the £11,395 Excite car and the steel wheels with plastic trims are replaced with 16-inch alloy wheels. The design also changes with the addition of a rear spoiler and side skirts. Inside, a leather steering wheel is found alongside the infotainment unit, while air conditioning, a DAB radio and parking sensors are also added.

The range topping Exclusive car is finished with part leather sports seats, and builds on the Excite model with a reversing camera, cruise control and a six-speaker audio setup. It’ll be priced from £12,795.