The facelifted MG3 goes on sale in September, with a major interior upheaval on the way 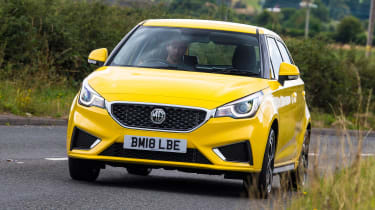 There’s plenty to like about the new MG3 as this is an extensive facelift. The interior steps up massively with a much more modern design and the addition of a proper infotainment unit, while the car remains immensely affordable. Yet the package is let down enormously by the engine. It was outdated before, but now it feels Jurassic compared with the turbocharged norm in this class.

MG is aiming to crack 10,000 sales in the UK next year, with the firm’s MG3 supermini tasked with delivering some of that volume. This mid-life revamp is intended to kickstart sales, ahead of an all-new version arriving in 2022.

Coming five years after the MG3’s UK debut, the front has completely changed. It gets a larger grille that’s similar to the one used on the ZS crossover, flanked by fresh LED headlights and appearing above a sportier new bumper.

The exterior facelift is rounded off by a new pair of side skirts and a revised rear bumper, which also looks suitably sporty. Personalisation options remain a big part of this car’s appeal, and it brings a new set of 16-inch alloy wheels, too. 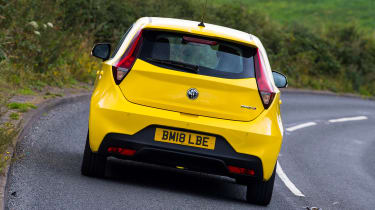 It’s the changes in the cabin that impress the most, though, because inside it’s a totally clean sheet of paper. It feels far more up to date than before, with the adoption of an eight-inch touchscreen infotainment display with Apple CarPlay included on all but the entry level Explore model.

The display large and sharp enough, but it’s not the most intuitive system to navigate. It’s housed in a completely redesigned centre console and dash set-up, which includes fresh dials and a new steering wheel, lifted from the ZS.

The interior materials remain cheap, although at such a low price tag that’s not surprising. Step up to Exclusive trim and you get a leather steering wheel and partial-leather sports seats, which raises the bar a little and rounds off what is a thorough and worthy interior update.

On the road the steering remains decently weighted and offers a pleasant amount of feedback. But while the MG3 used to serve up a surprisingly sporty experience, the game has changed.

It means that this is a supermini that’s now just adequate to hustle around a bend, but it isn’t helped by the particularly high seating position. Elsewhere, it keeps the pre-facelift car’s major drawbacks, so that means a poor, rigid ride around town, where even small imperfections in the road surface can be felt through the seat.

Sure, with 105bhp and 137Nm of torque it outguns the baby options offered in the Ford Fiesta and SEAT Ibiza and comes in at a cheaper price tag, but it’s less economical than those two, rated at 47.1mpg on so-called NEDC2, a WLTP figure converted back to NEDC. The conversion returns 140g/km CO2 as well, which is high for such a small car. 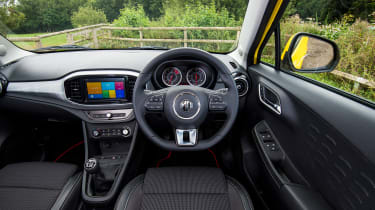 Get behind the wheel and you’ll soon realise that, despite its minor updates, this is an engine well past its sell-by date. MG’s quoted maximum power figure feels like it only hangs around for a split second, and you have to really rev it out to 5,000rpm and beyond to find that sweet spot. It’s antiquated, noisy, and 70mph on the motorway feels like the edge of its comfort zone.

The torquey, three-cylinder turbo units found elsewhere in this class roundly trounce it. That’s a shame, because had the 3 arrived with a new motor along those lines, while also keeping its edge on value and a seven-year warranty, MG could have been on to something.