MG has avoided extermination more times than the Doctor. But can the new MG3 stay out of the clutches of the best budget buys? 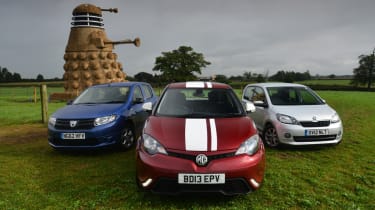 Like the hero of Doctor Who, MG has been through a few regenerations over the past 50 years. However, after a decadeof uncertainty, the brand is out to recapture former glories under Chinese ownership.

The slow-selling MG6 has failed to make an impact, but the all-new MG3 supermini has all the right ingredients: neat styling, a spacious interior and bargain pricing.

Low insurance costs and a wide range of personalisation options add even more showroom appeal to the practical five-door hatch. Prices range from £8,399 for the entry-level 3 Time model to £9,999 for the top-spec 3 Style tested here.

However, the MG3 isn’t the only car to mix supermini style and practicality with a city car price. The no-frills Dacia Sandero can’t match the MG3 for style or brand appeal, but it’s just as spacious and well equipped. Plus, it costs even less: our Laureate 900cc TCe test car is £8,795.

But do these cut-price contenders make more sense than a city car? Skoda’s Citigo mixes small car running costs with lots of space and grown-up dynamics. Can the MG see off the challenge?

Despite its size and power advantage, the MG3 failed to stamp its authority at our test track. It led the way in the 0-60mph sprint, with a time of 10.1 seconds, but the 1.5-litre engine’s gutless low-down response meant it could only pull out a narrow advantage over the 1.0-litre three-cylinder Skoda during our in-gear tests. The Citigo felt livelier than its figures suggest, but neither car could match the turbocharged Dacia for effortless pace.

You’d expect these value-for-money cars to be very cheap to run – and the Skoda in particular doesn’t disappoint. Unfortunately, this is where the MG really struggles: it’s hobbled by weak residual values, poor fuel economy and relatively high CO2 emissions.

The MG wins the space race thanks to its roomy cabin. Not only is there a lot more legroom for rear passengers than in either of its rivals, but you can also just about squeeze three adults across the back bench. The interior has lots of useful storage for odds and ends and the 285-litre boot matches those of most mainstream superminis. Our only concern is that the low-rent cabin doesn’t feel durable enough to deal with family life.

It’s another victory for the small Skoda. Unlike its rivals here, the Citigo doesn’t feel like a bargain-basement car to drive and own. It’s solidly built, well equipped and boasts very grown-up driving dynamics. And while it’s not as roomy as the other two cars, there’s more than enough space for most buyers.

The Dacia and MG are closely matched. But in the final reckoning, the Sandero gets the nod, thanks in no small part to its lower price, eager engine and smoother ride. It doesn’t look as trendy as the MG and isn’t as sharp to drive, but it has a more durable cabin and should cost less to run.

MG shouldn’t be too disappointed with third place. The newcomer is great value, neatly styled and spacious, while the well sorted handling makes it good fun to drive. However, it’s held back by a mediocre engine, rigid ride and low-rent cabin. Equally disappointing are the poor economy and emissions.