MG has long history with sporting saloons, and MG6 Magnette is latest in the line 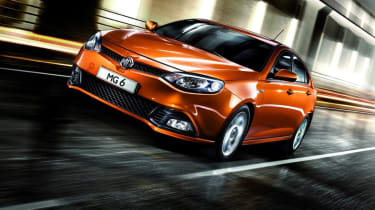 With a rich history of sports saloons, the MG MG6 Magnette is the latest in a line of four-doors from the once revered British brand. The Magnette name was last used back in 1969, but MG's Chinese owners have used it to identify the saloon version of the MG6 GT hatchback. It rivals the VW Jetta and Volvo S40 and has a generous boot, and it undercuts both of them in terms of price. There’s currently only one engine available, a 1.8-litre turbocharged petrol that can also trace its roots to Rover's long-running K Series unit.

A 1.6-litre petrol and 1.9-litre diesel are on their way, but like the MG6 GT, the MG6 Magnette makes do with only one engine for the time being. The 1.8-litre turbo petrol unit has 158bhp and 215Nm of torque which are impressive statistics. However, despite quoting a 0-60mph time of 8.4 seconds, the unit doesn’t feel as healthy on the open road and makes more noise than the more modern smaller capacity units found in its rivals. Still, handling is neat and tidy, and the MG6 Magnette can genuinely be enjoyed on a flowing backroad, even if the five-speed manual gearbox could have a slicker operation.

All MG6 Magnettes are well equipped, and the mid-level SE model comes with front and rear parking sensors, air conditioning, cruise control, 17-inch alloy wheels, sat-nav, a USB port and tyre pressure monitors. But despite being commendable for its performance, the efficiency of the 1.8-litre turbo engine is disappointing, emitting over 180g/km of CO2 and costing owners £210 a year in road tax. The Volvo S40 isn’t much better, but the Volkswagen Jetta 1.4 TSI only chucks out 144g/km and is far more economical than the Magnette’s mid-thirties combined economy. The MG does come with three-years of European Roadside assistance, though.

It looks similar to the hatchback it's based on, but the MG6 Magnette adds a traditional boot to the sleek shape. The result isn’t quite as attractive as the MG6 GT, but it still stands out – even against such talented competition as the VW Jetta and Volvo S40. All models benefit from alloy wheels, body coloured trim, deep bumpers and a stainless steel exhaust finisher. Some of the details are a little clumsy though – the fake vents on the front wings are a let down – and overall it’s already looking dated next to its contemporary rivals.

Rear legroom is particularly good, although like the hatchback taller occupants will have to watch their head as the sloping roofline eats into the space available. Still, the boot is generous and between the driver there’s an air conditioned cubby perfect for keeping drinks and snacks cool on longer journeys. There’s plenty of other storage to be found in the cabin as well, and the MG6 Magnette even has a dedicated space for users to store their MP3 players when being used in conjunction with the stereo.

Chinese-owned MG hasn't been around long enough or sold enough cars to feature in our latest Driver Power Survey, but the brand will have high hopes as it enters the ultra competitive UK market. Still, all models come with a three-year warranty, the first 12 months has no mileage limit and there’s three years of European roadside recovery thrown in with every new MG6. So far no MG6 Magnettes have been tested by Euro NCAP, although even the most basic models come with Isofix mounting points, four airbags and a switch to disable the front passenger airbag if you're mounting a child seat there. 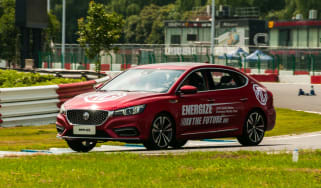 Based on the Chinese Roewe i6, the new MG6 is a mixed bag, although the hybrid eMG6 should boost appeal
Skip to HeaderSkip to Content