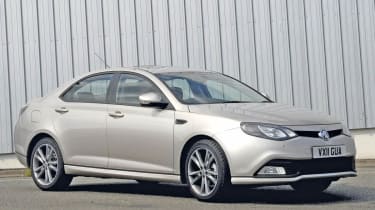 Judged on its equipment and handling alone, the new MG6 saloon is a decent alternative to a used 3-Series. It has a massive boot and attractive styling, too. Inside, the car trails in terms of material quality, but the main problem is the lack of shove and poor economy of the 1.8 turbo engine. Even three-year-old units from BMW and Audi are better. Next year’s diesel may be the answer, but the space and kit on offer will draw some floating buyers to the four-door.

Would you pay more for a saloon than a hatchback? MG is hoping buyers will, as this new four-door version of the 6 carries a £500 premium over the five-door.
According to the Chinese-owned firm, having a traditional three-box shape alongside the hatch will lure in cash-strapped fans of the BMW 3-Series. But is it worth paying extra for?
Well, the saloon offers more boot space than the five-door – it’s 25 litres bigger, with a huge 498-litre capacity. There’s still room under the floor to upgrade the standard space saver spare for a full-size wheel, too. Plus, the rear seats fold down to expand the load bay further.

Everything else is shared with the five-door, so the sole engine choice is a 1.8-litre petrol turbo: the car’s weakest link. This 158bhp unit is an extensively reworked version of the old Rover K Series. But despite the turbocharger, it doesn’t feel powerful enough. A car sold as a sports saloon needs more shove, even if that comes from a diesel (due at the end of next year).
Rewarding
The ride and handling are much better. As with the 6 hatch, MG’s British engineers have worked to ensure good body control, and a ride that isolates pothole shocks and is even over undulations.
The result is a car that’s rewarding to push, but also comfortable at lower speeds. It’s just a pity there’s no sixth gear to reduce motorway revs and boost the 35.6mpg claimed economy.
Inside, there’s a modern feel, but the buttons are slightly ill-fitting and some of the plastics feel hard and flimsy to the touch.
The base saloon starts from £15,995, and gets the same spec as the hatch version, with alloys, air-con, traction control and a hill hold function. For £17,495, the SE adds sat-nav and front parking sensors, while the £19,995 TSE comes with a sunroof, leather, Bluetooth phone connection and a rear parking camera.
MG reckons the saloon will rival used examples of the 3-Series and Audi A4, and bosses are specifically targeting buyers by advertising the newcomer on second-hand car websites.
Share this on TwitterShare this on FacebookEmail