Based on the Chinese Roewe i6, the new MG6 is a mixed bag, although the hybrid eMG6 should boost appeal 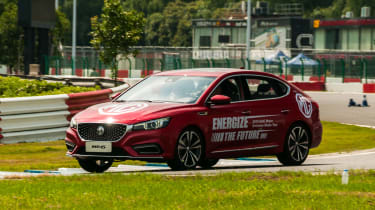 While the new MG6 is reasonably good to drive, it can’t deliver in other areas. Decent road manners are hampered by interior quality that fails to compete with European rivals. The availability of a plug-in hybrid will boost its appeal, however.

Finally, there is an MG with some oomph. While this new MG6 may not be the roadster some would have hoped for, it does go some way towards living up to the brand’s sporting pedigree.

The MG6 is based on the Roewe i6, which launched in China over a year ago. There is a choice of two models: one petrol and one plug-in hybrid. Coupled with the flat bottom contoured racing-style steering wheel and red leather-trimmed seats, this car promises a lot more than the old one.

A limited test drive on track in China proved the new car is both agile and brisk. The seven speed dual-clutch gearbox works well at low speeds with quick, smooth changes, but it hesitates as you start to push on. The steering is overly light, but road holding is reasonable – making the MG feel quite playful. 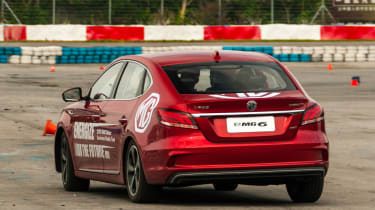 Unfortunately, the good news stops there. Although it’s an improvement on the generic-looking i6, there is still nothing particularly distinctive about it. The overall look is vaguely reminiscent of Japanese cars from about 20 years ago, in fact. The sloping bonnet and the ‘Star Rider’ diamond grille are the car’s saving graces.

While aesthetically the interior is pleasing, MG once again fails to deliver on the quality front. While the red leather trim in our Trophy-spec test car feels fine, the top of the dashboard and doors are crafted from hard plastic. Red stitching on the steering wheel and the carbon-fibre look plastic detailing along with metal pedals do go someway to offset this, but the overall feeling is a bit cheap.

Equipment levels are generous, however, with features like a 360-degree parking camera and voice control. On the safety front, the MG6 gets six airbags, autonomous emergency braking and a lane departure warning system.

Despite the sloping roofline the rear offers reasonable space for adult occupants and continues the front’s black and red look. Passengers get their own air vents and a USB charger in the back of the centre console. The boot is reasonably big, but on our car part of the parcel shelf had already fallen off.

We also managed an even briefer drive of the eMG6 plug-in. Externally identical, it uses the turbo three-cylinder from the ZS SUV, coupled with an 82bhp electric motor. Pure electric range is 33 miles, which puts it on par with European rivals like the Volkswagen Golf GTE. The Chinese BYD Qin Pro offers similar performance, however, and can manage 62 miles on a single charge.

Surprisingly, the PHEV version of the MG is slower than the 1.5T. It switches to 17-inch wheels, but body control seems largely unaffected. The petrol and electric units work seamlessly together, and the only real indication you’re in a hybrid is the subtle whine from the engine.