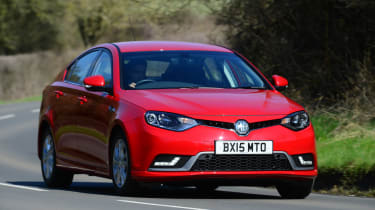 The MG6 never really offered much to warrant consideration in the past, but this refresh has improved the car’s desirability. Small but important changes have been made meaning it’s nicer to live with, and thanks to a £3,000 price cut, cheaper too. It won’t make much of a dent into Focus and Astra sales but will more than likely improve MG’s fortunes in the UK.

The MG6 was the car tasked with presenting the new face of MG to UK buyers in 2011, but it was always up against it. It was only available with an uneconomical and costly to tax turbocharged petrol engine under the bonnet, a cabin made with iffy plastics and there were only a handful of dealers to sell it – it’s remarkable that it sold any at all.

Four years on though, and the tide could be turning. A more youth-orientated MG3 supermini appeared in 2013, and it hope to have 80 dealers signed up by the end of 2015, including a shiny new flagship store in Piccadilly Circus. There’s even a new range of SUVs planned to roll out of MG’s Longbridge factory in the next few years. But before all that MG has given its MG6 a much-needed overhaul and Auto Express has got behind the wheel to see if the car finally makes a tempting choice.

Most importantly MG has repositioned the 6 so that it now takes on the Ford Focus and Vauxhall Astra rather than larger cars like the Mondeo. It benefits from a healthy price cut with the entry-level car now wearing a no-discount £13,995 price tag – that’s £3,000 less than the old car. The range has been simplified too – the petrol has been dropped, meaning a 1.9-litre turbodiesel is the only option, while the awkward-looking Magnette saloon has also been axed leaving just the five-door hatch. Along with the price cut, the line-up has been rebadged so now there’s S, TS (with sat-nav as standard) and TL (which adds leather trim). 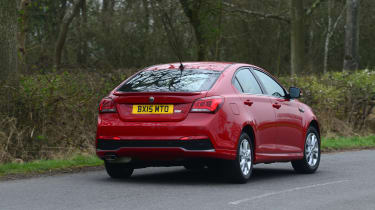 MG has tweaked the 148bhp 1.9-litre diesel meaning it gets to 60mph in 8.4 seconds (0.5 seconds quicker), combined fuel consumption has been bumped up from 57.6mpg to 61.4mpg, while CO2 emission have been cut 10g/km to 119g/km meaning a year’s road tax now costs £30 instead of £110. MG’s engineers have also dialed back the suspension giving a more comfortable ride and there’s a new six-speed gearbox that is far more precise and satisfying to use. The MG6 has always been more focused on fun that comfort, but even so it falls a little short of the Focus for handling That said, it’s more involving to drive that a Kia Cee’d or even the Vauxhall Astra. Attack a country bend and the MG6 feels agile and responsive, with only the heavy diesel engine promoting a bit of understeer during hard cornering, and the worst kind of potholes thumping through the cabin. MG would do well to take a look at insulating the driver more from the diesel’s clatter at high revs, and adding more feel to the steering – it has a strange characteristic of never weighting-up through corners. 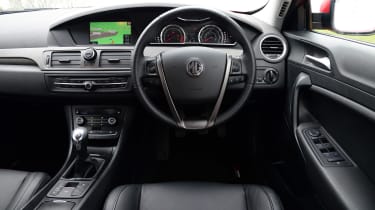 MG’s Birmingham-based design studio has given the 6 a fairly major cosmetic refresh, too. There’s a new front bumper with LED day-running lights, a neater grille and new headlights that on top models also ‘bend’ around corners. Top-spec TL models get an extra chrome strip along the lower edge of the window line, while at the rear, there’s a more sharply styled rear bumper and LED rear lights. It’s a successful refresh but we’ll leave it up to you to decide whether it looks better or not. Inside, there’s a welcome upgrade of the infotainment system – it’s now a seven-inch touchscreen unit with a far more intuitive sat-nav system and Mirrorlink. Sadly, the screen still looks too small for the space it sits in, the interior’s quality is still patchy in places and the controls on the steering wheel are still fiddly to use. The unorthodox handbrake with its release button under the lever has gone and has been replaced by an electronic one – and there’s plenty of kit – our top-spec car came with electrically adjustable and heated leather seats, directional headlights, dual-zone climate control and a rear parking camera. 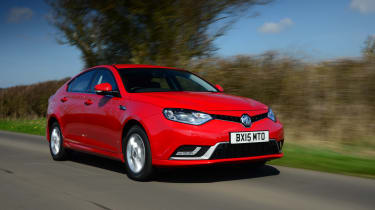 That may not sound anything special these days but the important bit is how much MG is charging for the top-drawer TL. At just £17,995 an equivalent Vauxhall Astra would cost around £6,000 more and with a 472- litre boot (that grows to 1,268 litres with the back seats folded) is more than 150 litres larger than a Focus’s. Overall then, MG’s overhaul of its slow-selling 6 has largely been a success as a larger number of gripes have been remedied and the price cut means it represents tremendous value for money. While in the past the MG6 has just scraped a three-star rating, it now deserves a strong three stars as offers a strong case for consideration for those wanting a practical hatchback that doesn’t break the bank to buy.