Our Clubman has completed two European tours and 9,744 miles - time for its second report! 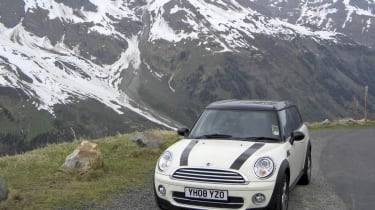 We don’t believe in giving cars a gentle introduction to our long-term fleet at Auto Express. Just a couple of weeks after collecting our new Cooper D Clubman from the factory in Oxford, the MINI set off on a round Europe journey that pushed it to the limit.

And despite being one of the smallest cars on our fleet, the MINI proved to be the perfect companion.

For starters, it served up a first-rate driving experience. We all know that a MINI is great fun around town, but it was the Clubman’s cruising refinement that particularly impressed. It sat at high speeds on Germany’s autobahns for hours at a time, remaining completely composed.

But the biggest surprise was how comfortable the Clubman was. We can’t think of any other small car that is so cosseting on a long journey.

Once into the mountains, its strong brakes, sharp steering and agile handling raised a smile, especially on the twisting Grossglockner pass – Austria’s highest Alpine road.

Despite the amazing views and freezing temperatures at the summit of this amazing stretch of tarmac, it was the Clubman that was the centre of attention. In fact, wherever we went, the estate version of the MINI attracted plenty of admiring looks.

Our car’s optional sat-nav performed brilliantly, too. Its ability to bring up details of local hotels, restaurants and places of interest proved to be endlessly useful.

To top off a faultless performance, the MINI returned excellent fuel economy - overall it managed a remarkable 51.3mpg.

And as soon as the Clubman was back in the UK, road tester James Disdale grabbed the keys and went off on his own MINI adventure! He headed back towards Dover and on to a cross-Channel ferry. From there, the Clubman completed a punishing 3,500-mile tour of the Continent which took in France, Switzerland and Italy.

On this trip, the MINI’s credentials as a load carrier were really put to the test – and it passed with flying colours. With the rear bench folded flat, the car swallowed two bikes, as well as luggage. And when it was time to return home, there was even space left over to squeeze in a few cases of French wine!

The Clubman is now back in the Auto Express car park, having covered nearly 7,000 miles in less than two months. Now, the biggest challenge will be keeping hold of the MINI before someone else takes it globe-trotting...