Final report: Our estate signs off in style in a face-to-face with MINI’s hot hatch JCW flagship. 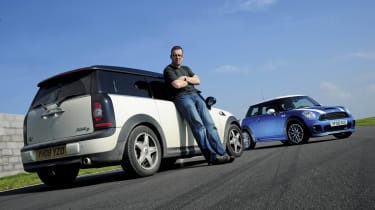 We certainly kept our MINI busy, though! As we reported in the last update the Clubman did two round- Europe trips, covering nearly 7,000 miles in two months, and there was no let-up in the hard work. As you can see above, the Cooper D also met up with our reigning hot hatch of the year, the John Cooper Works version of the MINI, at our Performance Car of the Year event in Wales.

And it’s a testament to the appeal of the Clubman that even after sampling the rapid hot hatch, I was more than happy to jump back into the Cooper D. It doesn’t have the power of the JCW, but the Clubman retains the engaging driving experience that makes MINIs so special.

The controls are wonderfully accurate, while the sharp steering, smooth throttle response and slick gearshift are a constant reminder of the depth of engineering quality. Our motoring has been largely trouble-free, too.

The £60 black bonnet stripes had to be removed after some acidic bird droppings left a permanent stain, although I thought the car looked better without them. And there was also a mystery handbrake fault, which allowed the car to roll dangerously down a hill.

Stephen James MINI in Ruxley, Kent, carried out our first service with little fuss as part of the MINI’s five-year £185 all-inclusive tlc maintenance pack. It also replaced all four brake discs under warranty – explaining there was a production fault with them – although we never did get to the bottom of whether this was connected to the one-off handbrake problem.

Another puzzle was solved, though – the onset of winter resulted in the stop/start system occasionally shutting down. A quick check of the handbook revealed the engine is sometimes deliberately left to run on at idle in the extreme cold. Nevertheless, during our time with the MINI, we averaged an impressive 44.9mpg.

The Clubman draws plenty of attention, too, and the eagle- eyed among you might even notice the larger 17-inch alloys on the car in the above action picture. The MINI wore these  for a tyre safety feature at the MIRA proving ground, where its punctured run-flats scored highly.

There’s no doubt about it – with its superb blend of fun, frugality  and refinement, our Clubman will be sorely missed.

I only managed to prise the keys to the Clubman out of Owen’s hands twice – but it was easy to see why he loved it. There’s just enough performance to live up to its famous badge, while the long- distance economy is superb. A weekend trip from London to Wales went by in a flash, and cost half as much in fuel as most other long-termers.