The fun to drive MINI is now fun to use, too! 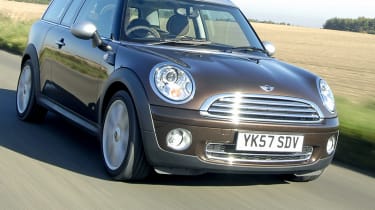 Driving The Clubman remains very close in spirit to the regular MINI hatchback. So handling remains outstanding. The extra length in the wheelbase brings a sense of increased stability, but the car’s trademark agility is still present. The steering is full of feel, and the compliant suspension keeps the car flat though corners, yet still soaks up the bumps. Indeed, the longer wheelbase means the ride is actually better than the hatch. Engines are unchanged, so the diesel proves punchy, while the 1.6-litre petrol pulls well and has a tuneful exhaust – qualities enhanced in the high-performance Cooper S.

Marketplace The Clubman is billed as a more practical version of the MINI hatch. It’s longer, the wheelbase has been extended and it’s a little taller – but its most interesting features are the extra doors! At the rear, there are twin swing-out openings, which are really funky. And behind the driver’s door, there’s a hidden rear-hinged ‘Clubdoor’. Unfortunately, using it is a bit of a pain, and it’s mounted on the wrong side for safe use by UK passengers. There are three Clubman variants, using the same engines as the regular hatch: Cooper, Cooper S and Cooper D. The base 1.4-litre variant isn’t available. Rivals include conventional superminis, alongside which the Clubman's extra usability shines through, though some also may see it as a rival to supermini estates such as the Peugeot 207 SW and Skoda Fabia estate.

Owning The Clubman is a much better proposition for passengers. There’s as much space in the back as a Peugeot 207 supermini, meaning the cabin is a comfortable proposition - something which can’t be said of the hatch. Those long windows also let in lots of light. The 260-litre boot is still small, but it’s a significant boost over the hatch, and folding the seats is an easy process; doing so extends it to 930 litres. The van-style rear doors are fun, but do overhang when open and restrict rear visibility on the move – though, like the Clubman as a whole, quality, desirability and engineering are second to none. Rather like residuals, which are as good as an executive or sports car, while we were very impressed with fuel economy too. BMW’s EfficientDynamics technology really does work.