The MINI hatch’s more practical brother the MINI Clubman has been fully revealed, priced from £19,995 in the UK 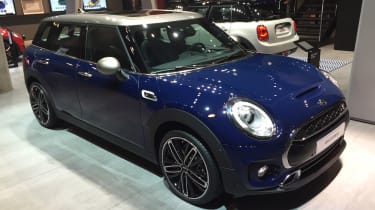 On sale now from £19,995, the new MINI Clubman made its public debut at the 2015 Frankfurt Motor Show. It's the third prong in the new MINI family, and carries the heavy burden of widening the British brand's appeal to more family orientated customers. It's also part of a "comprehensive realignment" of the firm's brand strategy that sees it expand into the premium compact class.

Until next year’s new MINI Countryman arrives, the Clubman is the largest production model the firm has ever produced. With a length of 4,253mm, a width of 1,800mm and a wheelbase measuring 2,670mm, it’s 270mm longer and 73mm wider than the outgoing Clubman. It’s noticeably longer and wider than the current MINI Countryman, too, and is our first proof of MINI’s plans to bump both Clubman and Countryman up a class.

MINI’s load-lugger uses BMW’s UKL1 platform, as already used on the MINI Hatch and both the BMW 2 Series Active and Gran Tourers. Consequently the Clubman is taking on big players in the compact estate market like the Volkswagen Golf rather than the Skoda Fabia Estate – a car the old Clubman could call a rival. 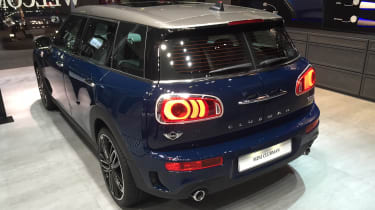 New MINI Clubman - how practical is it?

The newcomer’s arrival also spells the end of British buyers having to compromise when considering the MINI estate. The old Clubman famously had a quirky ‘Clubdoor’ – a two-door arrangement with a third half door on the driver’s side, which become unpopular among Brits for being impractical. The new one ditches it and conforms to a more traditional layout of four side doors, but keeps the old car’s retro twin ‘barn’ boot doors at the rear – the Clubman’s nod to the original Morris Mini Traveller and Austin Mini Countryman of the 1960s.

Open the cute split doors – or wave your foot under the bumper if the Comfort Access function is selected on the options list – and there’s a 360-litre boot that can be expanded to 1,250 by folding the rear seats down. As standard the Clubman comes with a rear seat back that tumbles 60:40 with an option of 40:20:40 if required, while a storage package is also available featuring a variable boot floor, additional storage, lash-down points, cargo nets and a 90-degree position for the seat backs. 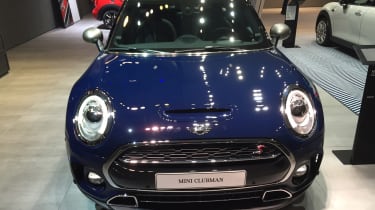 Speaking of the interior, the Clubman does not pinch the Hatch’s dashboard. Instead there’s a unique design for the air conditioning controls and the dash wraps round to the doors. MINI’s typical circular central instrument binnacle features though, with 6.5- or 8.8-inch screens available, and there’s a multitude of different trim and upholstery choices. 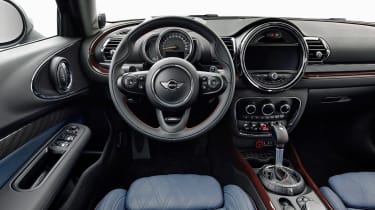 Until a John Cooper Works version arrives – likely to appear in mid-2016 – the Cooper S is the hottest version and uses a 189bhp 2.0-litre four-cylinder petrol. It gets to 62mph in 7.2 seconds and tops 142mph with CO2 emissions of 144g/km and a combined fuel consumption of 45.6mpg.

There's also the Cooper SD Clubman, which is fitted with a 190bhp turbo diesel. Performance is almost as sprightly as the Cooper S petrol models, as it's only 0.2-seconds slower to 62mph than the petrol model. 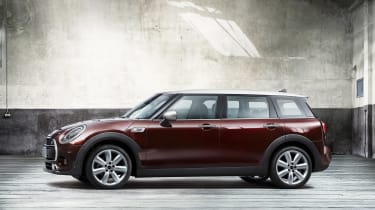 In a further statement during the Clubman launch, Peter Schwarzenbauer said the new car was part of a realignment of the "product and brand strategy" that sees MINI move away from its current market position. The Clubman, which moves into a larger segment, will become part of a range that focuses "on five core models with strong characters".

The firm will no longer rely on spinning sub-models off the main MINI hatchback, which it tried to varying degrees of success with the now axed Paceman, Roadster and Coupe. But that's not to say innovation will stop, as Schwarzenbauer goes on to say "We will open ourselves up to new ideas and new business areas. We will develop the brand’s visual identity".

What do you think of the new MINI Clubman? Let us know in the comments section below...