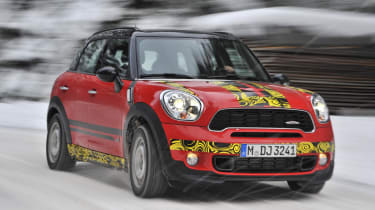 Even from our short drive, it’s clear that this car is on course to become the pick of the Countryman range, and the best-steering JCW model to date. It creates an interesting alternative to a whole host of cars too, including the VW Golf GTI and petrol-powered Range Rover Evoque. We still have reservations about the way the Countryman looks, but if you’re a fan of the MINI brand and want practicality and performance all-in-one, this could be just the ticket.

The John Cooper Works family is growing again, with the addition of the Countryman to its ranks. MINI has revealed a prototype of the hot four-wheel-drive crossover, which it claims is 85 per cent production ready, and allowed Auto Express behind the wheel for an early first drive on wintry roads in the Austrian alps.

Despite splashes of MINI’s traditional yellow swirled camouflage, the JCW’s pumped up bodywork can be seen clearly. It shares the same stepped grille, with a narrow air intake underneath, as the Cooper S, as well as the two square intakes in the lower grille. Beneath that though the front lip spoiler is lower and more pronounced.

At the rear the deeper bumper wraps entirely around the twin tailpipes, while the thicker side skirts, hidden here by yellow tape, are colour matched to the bodywork. The suspension is 10mm lower than the Cooper S too, giving the car a more squat stance, closer to a traditional hatchback than a compact crossover.

MINI refused to talk about power or performance figures, so we’ll have to wait until the car makes its debut at the Geneva Show in March for official stats. But on the snowy test route we had a chance to stretch its legs.

The power delivery was impressive – not as manic as the JCW Coupe or Hatchback, but the swell of acceleration was thrilling nonetheless. Expect the power output to be on a par with the Hatchback – that means 211bhp from the 1.6-litre turbocharged engine, while the 0-62mph time will be slightly slower, at around seven seconds.

Sports suspension from the Cooper S, featuring stiffer anti-roll bars and firmer dampers, is carried over to the JCW, except with the 10mm drop mentioned earlier. With a layer of soft snow on the roads, and winter tyres fitted to the prototype it was difficult to make a definitive judgement on the ride – but it certainly felt firm. We’ve criticised the Countryman in the past for its unyielding suspension, but in an overtly sporty model like the JCW it’s an acceptable compromise. To haul off the increased speeds, the rear brake discs have grown too, from 280mm to 296mm.

There’s the same three-stage ESP system and Sport button you’ll find in lesser Countrymans. The latter weights up the steering, sharpens the throttle slightly and gives the exhaust note a raspier sound with flurries of pops and bangs when you back off the accelerator – a JCW hallmark. It’s the steering though that steals the show.

Heinz Krusche, BMW’s head of driving dynamics and our co-pilot for the drive, told us that this car’s development was easier than any of the other JCW models, because there wasn’t the problem of torque steer to try and contain. And right from the off it's obvious the steering has a fluidity and accuracy that existing JCWs simply can’t match, because torque is shared between two axles.

We also had a chance to try the MINI Coupe JCW on the exact same stretch of road, and while the car squirming around underneath us and the wheel wriggling in our hands was fun, it didn’t inspire the same confidence. As the Countryman JCW prototype blasted into the distance, the Coupe JCW was left trailing in its wake.