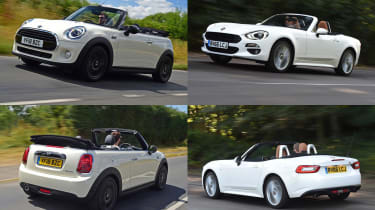 There’s no better way to enjoy summer than with an affordable convertible. We’ve lined up two that offer different recipes, but unique style. The Mini Cooper Convertible has received cosmetic updates including fresh LED lights and new parts and panels to customise the car’s looks.

The brand has maximised the British design theme, but buyers have an alternative with Fiat’s 124 Spider that provides an Italian flavour instead. The Fiat is a bit more expensive to buy than the MINI, but is the two-seater worth the extra? We put this drop-top duo head to head to find out. 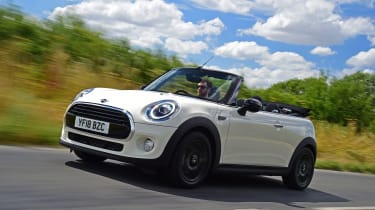 For: Great to drive, solid and fairly refined, offers more practicality than the FiatAgainst: Not as fast or as punchy as the 124 spider, less dynamic, back seats only really for occasional use

The new MINI Convertible is still based on parent company BMW’s UKL1 platform, and that’s most definitely a positive because the architecture under the skin makes this model one of the most thrilling drivers’ cars in its class.

There’s a 1.5-litre three-cylinder turbocharged petrol engine that sends power to the front wheels through a six-speed manual gearbox. It’s a simple but effective drivetrain because it involves you in the experience perfectly.

With 134bhp and 220Nm of torque, it wasn’t quite as quick as the Fiat, but there’s still plenty of performance. This means you have to work the engine and gearbox a little harder, which yields a nice thrum, especially with the roof down. 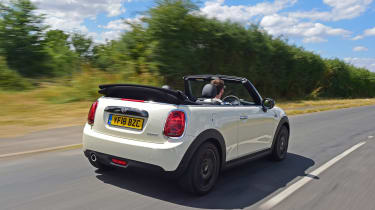 Our performance tests highlighted the decent turn of speed the MINI delivers. It went from 0-60mph in 8.9 seconds, which was 1.6 seconds slower than the 124 Spider, and while the heavier, less torquey MINI didn’t have the in-gear flexibility of its rival, it never feels slow.

It’s surprisingly mature when it comes to ride and refinement with the hood down, too. Of course, chop the roof off any hatchback and the resultant lack of rigidity will be instantly noticeable, but as with its predecessor, by strengthening the sills to retain some of the hard-top hatch’s composure, the Convertible offers a degree of its pointy handling and agility.

The multi-link rear axle helps here, because while the steering is quick and the chassis can cope with this speed, the extra involvement from the rear also helps it change direction sweetly. It is firm, so there’s not much roll, but despite this focus only harsher ridges at speed make the MINI feel unsettled. It does jump between bumps at mid speeds, although the damping offers just enough sophistication in the way it rounds the edges off potholes to make this bearable. 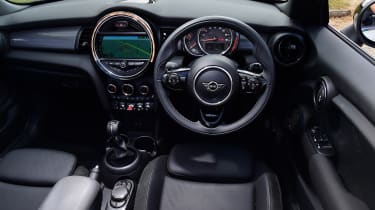 Other features that improve how easy the MINI is to live with include the level of kit. You get the basics – front and rear LED lights, air- conditioning, parking sensors and a 6.5-inch colour screen with Bluetooth and DAB – yet sat-nav and phone connectivity are extra.

Mini bundles these into packs that you might want to add. The £1,340 Pepper Pack includes climate and cruise control, plus different alloys and more storage, while the £900 Navigation Pack brings sat-nav and Apple CarPlay. Our car’s £2,000 Navigation Plus Pack adds a bigger 8.8-inch screen, traffic info and wireless charging, among other features. 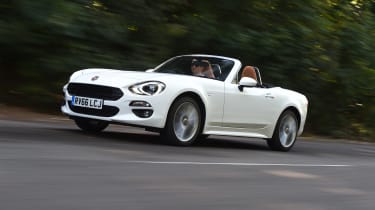 For: Strong performance, two-seater styling, handling agilityAgainst: Not as practical as Mini, more expensive to buy

Classica is the entry-level trim in Fiat’s 124 Spider line-up, but even then, at £21,055, the car is £1,260 pricier than the MINI. This will be less of an issue if you’re buying on finance (see Through the Range, opposite), although for the cash you only get a similar level of kit.

Much of the desirable equipment on the MINI is included in options packs, and you’ll have to add similar kit on the Fiat. A seven-inch touchscreen with DAB costs £750, but Bluetooth, air-con and cruise control are standard. If you want nav you’ll have to upgrade to Lusso spec, as in our pictures, starting at £23,085. It’s not available as an option. 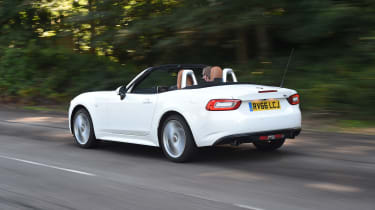 The rest of the interior is pleasant, however. The basic architecture is carried over from the Mazda MX-5 on which the car is based, and while it’s a lot more cramped than the MINI and isn’t constructed from such high-quality materials, the Fiat feels sporty and driver-focused.

This is what the 124 Spider is about, and the steering really makes it. The MINI’s system is quicker, but the Fiat’s is weightier. Given the light kerbweight of just 1,050kg – 155kg lighter than the MINI – this is how the 124 achieves its agility. The suspension set-up feels softer than the Cooper’s, so there’s actually a little more roll in bends, but this means you feel the dampers take up the slack and know just how much grip is on offer.

The answer is plenty, as with the MINI, but the Fiat adds adjustability into the mix thanks to its rear-drive configuration. The rear wheels are powered by a 1.4-litre turbocharged four-cylinder engine that produces 138bhp and 240Nm of torque. Those figures are similar to the MINI’s, then, but the 124’s low weight meant it was much quicker at our test track. 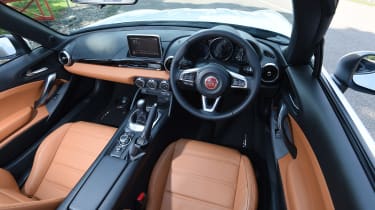 Helped by strong traction and a sweet six-speed manual transmission, it sprinted from 0-60mph in 7.3 seconds, while it was also considerably quicker in gear. The 6.7-second time from 50-70mph in sixth was a particular highlight compared with the MINI’s 11.3-second effort.

But while the 124’s engine is gutsy, it still lacks some high-rev thrills due to its turbo, even if having the roof down adds to the experience. The MINI is no better at higher revs, though. Otherwise, the Fiat is a comfortable, refined car that rides with composure. Only the most severely broken tarmac causes it to crash, because the progressive damping and low weight mean the 124 Spider skips over ruts and ridges. 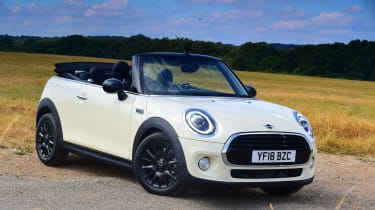 The Mini might not be quite as capable as the Fiat, but it’s almost as fun, will be cheaper to buy and run, plus is more practical. There’s more space and tech (even if a lot of it is optional), while the customisation potential has furthered an already popular part of the package. 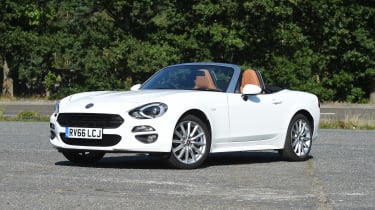 The Fiat is fun to drive with a focus on involvement. It’s a stylish package that’s faster than the MINI, too. These cars offer similar open-top enjoyment, but the 124 can’t match its rival’s high-quality feel, is pricier to buy and run, plus offers less usability and personalisation.