MINI has launched the new John Cooper Works GP at this year’s Los Angeles Motor Show. It’s the fastest road-legal vehicle the brand has ever built, with a 302bhp engine, functional aerodynamics and a tauter chassis. Global production for the JCW GP is limited to just 3,000 units, 575 of which will come to the UK priced from £33,895 each. First deliveries are due in March 2020.

The new MINI GP features similar flamboyant styling to the GP Concept that was revealed at the 2017 Frankfurt Motor Show with the striking spoiler and wheel arch extensions clearly inspired by that car. Made from carbon fibre-reinforced plastic, the extensions are designed to aid aerodynamics and cover the wider 18-inch wheels, while the front ones also feature the car’s production number.

All 3,000 John Cooper Works GP cars will share the same paint finish. The body is in Racing Grey, the roof in Melting Silver and the underside of the rear wing, lower air intake and grille trim feature Chilli Red paint. There are also several “GP” logos on the car, with the “JCW” emblem being used only on the brake calipers. 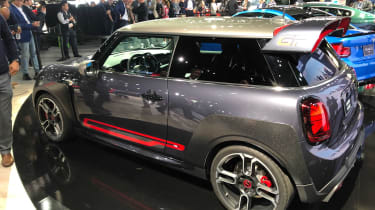 Most of the standard car’s chrome trim components, including the MINI badges, have been swapped for gloss black replacements. The GP also features a pair of darkened headlamp lenses and the latest MINI’s trademark Union Flag tail-lights.

Inside, there are two heavily bolstered sports seats but the rear bench has been ditched completely to reduce weight. The dash includes 3D-printed trim, again featuring the car’s production number, and the paddle-shifters are also 3D-printed in metal. The car’s nappa leather sports steering wheel also comes with a metal centre-mark at the 12 o’clock position.

The MINI John Cooper Works GP is powered by a reworked version of the hopped-up, turbocharged 2.0-litre four-cylinder engine found in the recently launched MINI Clubman JCW. Modifications include a reinforced crankshaft, stronger pistons and con-rods, a freer-flowing exhaust system, a larger turbocharger and a new intercooler.

The engine develops 302bhp and 450Nm of torque, which is fed to the front wheels via an eight-speed automatic gearbox and a mechanical limited-slip differential. As such, the new GP has a claimed 0–62mph time of 5.2 seconds – which is 0.3 seconds slower than the four-wheel-drive Clubman JCW – and a top speed of 164mph. 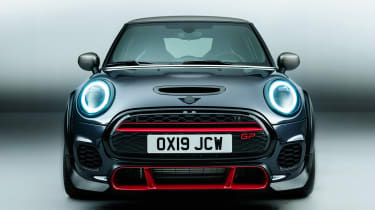 MINI also says the GP’s lairy body kit provides improved aerodynamic performance and cooling benefits. The front splitter and large roof spoiler have both been designed to improve the GP’s of downforce, while the large vents in the front bumper channel air towards the hatchback’s braking and cooling systems.

What does the MINI John Cooper Works GP have to beat? Read our run-down of the best hot hatchbacks on sale now… 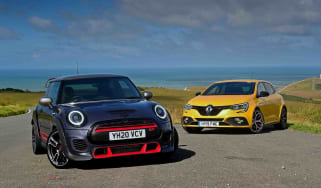 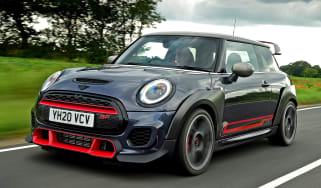 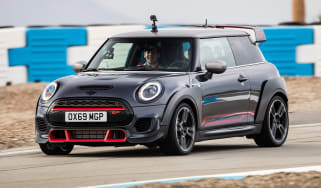