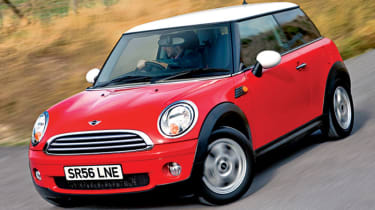 MINI can do no wrong at the moment. Engineers have reworked the bits of the Cooper which needed it and improved the spec – although the price has gone up by £600. In doing so, they’ve created one of the best-handling front-wheel-drive cars around. Most importantly, they’ve made sure they’ve kept the one key ingredient which makes the MINI special – the fun factor.

We've driven the flagship Cooper S and previewed the sporty Works accessories that let owners personalise their car. Plus, we’ve revealed when the entry-level One and diesel will be arriving. But there’s still a gaping hole in the all-new MINI line-up – our opinion on the top-seller.

Bosses at MINI say half of the cars sold in the UK will be the mid-range Cooper, which hits showrooms on 18 November. We wasted no time to be first behind the wheel of the newcomer which, like the rest of the range, is fresh from the ground up.

Under the bonnet, the old car’s 1.6-litre DaimlerChrysler-built petrol engine has been ditched, and replaced by one made in the UK. Designed in a joint venture with PSA Peugeot Citroen, the new 1.6 unit now features BMW’s impressive Valvetronic technology. And the good news is that it’s a cracker. Power is up by 5bhp to 120bhp, torque rises 10Nm to 160Nm and fuel consumption is 19 per cent better at just over 48mpg.

But the biggest improvement over the old Cooper is the ride and handling. The new suspension includes a sophisticated central arm rear axle, and the set-up has been tuned differently to the S to give the Cooper a sporty yet refined ride.

The car corners like a go-kart, and there’s masses of grip. The six-speed manual gearbox is a pleasure to use, with short shifts adding to the performance feel of the Cooper. If you opt for the automatic, which is on sale from next month, paddleshift gear-changers will be fitted as standard.

The steering has also been revamped to make it even sharper, and the addition of reach adjustment to the wheel means the driving position is more adaptable than before.

Visually, the Cooper is marked out from the S by the lack of a bonnet air intake and the single exhaust pipe at the rear. Standard kit includes anti-lock brakes with electronic brakeforce distribution, front, side and curtain airbags, 15-inch alloy wheels and remote central locking. It’s a winning package, and BMW can be confident it has another surefire hit on its hands.