Second generation of stylish Convertible has lost none of its cool factor and has gained some clever new additions. 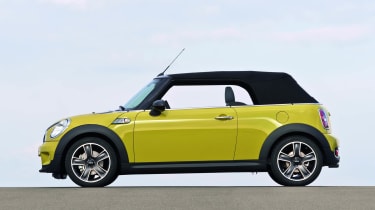 Styling/image The second generation of the cabrio isn’t immediately distinguishable from the first. As a result, the same retro looks and matching pram-style hood retain the model’s appeal, as the designers knew it would. And the MINI is cool, in any form.

Interior/practicality Again, little has been altered although there are a few new creative ideas, such as the Openometer which logs how much time has been spent driving with the lid down. Build quality is excellent throughout, the powered hood folds in 15 seconds and there’s even 125 litres of space in the boot, rising to 660 litres. There’s not a lot of room in the back, though.

Engine/performance For keen drop-top drivers, there’s the Cooper S or mighty JCW. However, if most of your motoring is urban, the 120bhp Cooper is arguably a better choice. There’s an automatic six-speed option, superior fuel returns to the S’s and a wide range of safety and driver aids. And as it’s a MINI, entertainment is guaranteed.

Driving experience Rather than go tearing off towards the horizon, in this car you can cruise the summer streets and stop to chat with friends on the way. It’s undemanding to drive, yet guaranteed to make you smile.