Latest special adds style and kit to the MINI Convertible 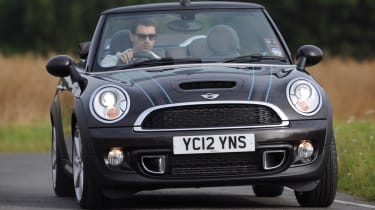 The Highgate is a stylish, high-spec addition to the MINI range, and drives with all the verve of the standard car. Buyers don’t make a huge saving – a Cooper S Convertible fitted with the same options doesn’t cost that much less – but the point is to add a little extra exclusivity to MINI ownership.

MINI is famous for its range of personalisation options. Buyers can change everything from the colour of the roof to the stitching on the dash. If you’re struggling to choose, though, there’s always a ready-made special edition. We drove the latest in a series named after areas of London – the MINI Highgate Convertible.

For the money, you get plenty of kit. The Chili pack is standard – this adds xenon headlights, a sports steering wheel and auto air-con, and is usually £1,940. There are also Highgate badges on the flanks, seat tags and door sills, plus the car gets Dark Truffle leather seats (normally £1,300) with blue piping round the edges.

The seats look smart alongside the Iced Chocolate paintwork and bold racing stripes, although more conservative buyers will be able to opt for a Midnight Black or White Silver finish.

Our test car came with a few further extras, including a colour sat-nav (£1,345), which sits inside the central speedo. It also had the Vision pack, with automatic lights and wipers, for £305.

Under the skin is the same 1.6-litre turbo petrol engine as in other Cooper S Convertibles. It has a gruff exhaust note under acceleration, and pops and bangs on the overrun, which is lots of fun with the roof down. The perky four-cylinder delivers 184bhp – good enough for 0-62mph in 7.3 seconds.

Well weighted steering and firm suspension make it easy to throw the Highgate into corners. Hit a big bump and vibrations through the chassis let you know the Convertible isn’t as stiff as a MINI hatch, but most of the time you’ll have just as much fun.

If you view the Highgate as a standalone model, it’s a comfortable, stylish and fun car to drive – and for some buyers, this is all that matters. However, £24,085 is a lot of money to pay for a car with cramped rear seats and such a tiny boot.