The Mitsubishi GT-PHEV could preview a future successor to the current ASX with bold styling and advanced tech. 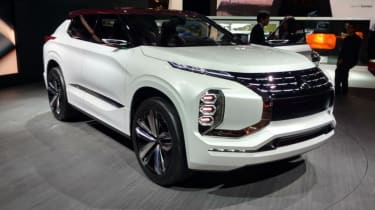 Mitsubishi has revealed a brand new SUV concept that's taking pride of place on its Paris Motor Show 2016 stand. The 'Ground Tourer' is described as the "latest expression" of the brand's design journey - it's officially called the GT-PHEV Concept and is powered by Mitsubishi's plug-in hybrid electric vehicle technology.

The steeply raked windscreen and narrow glasshouse in these first pictures show a more outlandish look than any of the current production car range, with bold styling details such as the vertical light arrays and heavily chiseled side panels giving it a very distinctive look.

The front end of the Ground Tourer shares design cues with the XR PHEV II concept from the Geneva Motor Show in 2015. Mitsubishi calls the front-end look 'Dynamic Shield', hinting at the safety aspects of the design. Design boss Tsunehiro Kunimoto said "we wanted to create the look of high performance with a large grille, but do not need the whole thing as a big air intake - black plastic [on the lower half] is the best material to use because it reduces [wind] noise".

Similarly, the rear bumper is designed to look like a skid plate. There's a single light bar stretching across the rear which houses the tail-lights and brake lights. Mr Kunimoto described that as "maintaining Mitsubishi's design heritage of horizontal themes". 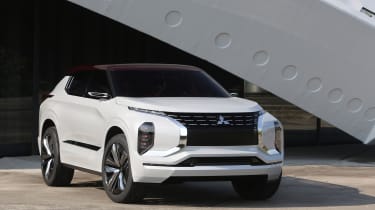 Mitsubishi describes the interior as a "horizontal dashboard,” featuring a chrome detailing strip that the brand says helps make the cabin feel more spacious. Rotary dials also help with ergonomics, with driving mode selectors being easier to use thanks to that design.

There’s also a high centre console and burgundy leather trim to match the exterior colour highlights. The instrument cluster is mounted in the middle of the car, with a display that shows lots of driving information as well as two displays mounted either side of the cluster which can act as virtual 'mirrors'. These are designed to show you a high-definition image from cameras mounted on where the door mirrors usually would be.

Under the skin is Mitsubishi's triple-motor PHEV system, featuring a next-generation battery pack, three electric motors and a traditional petrol engine. That means there’s a 25kWh battery under the floor and a 2.4-litre petrol engine under the bonnet. 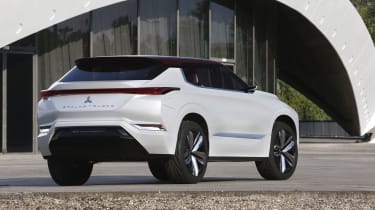 There's an electric-only range of 75 miles and a total range of 750 miles when the engine kicks in. The hybrid system is said to improve the car's on- and off-road ability thanks to the 'Super All Wheel Control' four-wheel drive tech. Emissions of just 26g/km are quoted, too.

It's also connected to the cloud, allowing the car to find route information such as weather and road conditions, as well as pick it up locally using a series of sensors and cameras on the car. The data is then used to help improve fuel economy and range by optimising the drivetrain for the conditions it will encounter over a journey.

While the previous three-door XR PHEV II concept is a supermini-sized SUV to rival the likes of the Renault Captur, the five-door Ground Tourer doesn't hint at a specific model. Instead, the brand tells us that it forms a vision of what all of its future models will look like - with the first of an all-new line-up coming to the Geneva Motor Show 2017 in production form.

What do you think of the Mitsubishi GT-PHEV concept? Tell us in the comments…