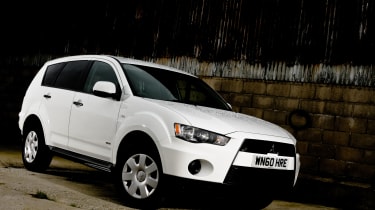 The Mitsubishi Outlander arrived in 2008 and is offered in both passenger SUV and commercial van versions. The van follows the usual formula for converted passenger vehicles, which means the back seats have been removed so the whole rear space is available for load-carrying. You still get the rear side doors for access, but the windows are blanked out.

While a converted car will never be the most utilitarian option around, in this case it does create an interesting alternative for users who need a work vehicle with plenty of practicality but want to look a bit more stylish. The Outlander 4Work features Mitsubishi’s On Demand 4WD four-wheel-drive system. It's powered by Mitsubishi’s 2.2-litre diesel engine, producing 147bhp and 380Nm of torque.

The Outlander offers a competitive gross payload of 705kg and more load space than smaller models such as the Mitsubishi ASX and SsangYong Korando CSX. The Citroen Berlingo XTR+ and Peugeot Partner ATV with grip control both offer greater load space in a conventional van body with an enhanced two-wheel-drive traction system to give limited off-road capability.

Mitsubishi seems to have addressed the traditional problems of all-wheel-drive commercial vehicles with poor fuel economy. The Outlander offers a combined-cycle fuel consumption figure of 53.3mpg, which should mean everyday fuel consumption in the mid-40s mpg.

The economy potential has to be considered against comparatively short service intervals of 9,000 miles/12 months, although the Ssangyong Rexton’s 10,000-mile intervals are not a great improvement. The Land Rover Defender offers 12,000-mile/12-month service intervals.

The Outlander 4Work is in insurance group 22 – a higher premium than its rivals – while the SsangYong Rexton and Land Rover Defender are in group 12. The smaller SsangYong Korando CSX and Mitsubishi ASX are both rated group 7. 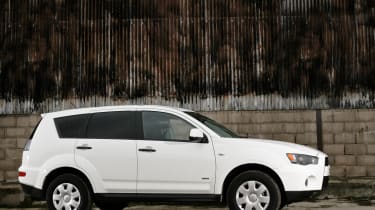 All Outlander 4Work models come with a Thatcham category 1 alarm, deadlocks and an immobiliser, so you won't need to pay extra for security.

Both the Outlander and ASX are based on the same platform, sharing the same wheelbase length of 2,670mm. The principal difference is that the Outlander has a longer rear overhang, which means it has more load space than the ASX 4Work.

The load volume measures 2.0 cubic metres, less than the SsangYong Rexton’s 2.2 cubic metres. The 705kg payload is a significant improvement over the previous Outlander’s 520kg. The Rexton has the edge with 740kg, while the Peugeot Partner ATV offers 850kg and 33 per cent more load space. Retaining the rear doors helps improve access to the load area, although it is restricted by how far the doors open. 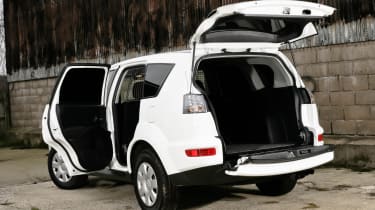 Like a number of 4x4 van rivals, the Outlander has a rear tailgate, giving good access to the load area, but making it difficult to load with a fork lift truck. On the other hand, the tailgate offers useful weather protection for anyone working at the rear of the vehicle.

A bulkhead between the cab and load area is included as standard, with a solid-steel lower and mesh upper section. The wheel arches take up some space in the Outlander load area, restricting width to 995mm, which is more than the Ssangyong Korando, but less than the 1,020mm in the SsangYong Rexton.

Towing is an important consideration for 4x4 vans, and the Outlander can tow a respectable 2,000kg braked trailer. The SsangYong Rexton can tow 3,200kg, but has the benefit of low-ratio gears. The Korando can pull 2,000kg, matching the Outlander. The two-wheel-drive Peugeot Partner can only manage a 950kg braked trailer. Costing a similar price, the Land Rover Defender 110 offers a towing capacity of 3,500kg. Mitsubishi reckons it has reduced the Outlander’s weight by 100kg, compared with the previous Outlander and that may have helped to increase the new model’s payload.

The Outlander’s diesel engine is a new one, launched for the first time in the new Outlander car and van ranges. It's based on the 1.8-litre diesel engine fitted to the ASX range. As such, it hasn't been around long enough to assess reliability. Mitsubishi provides a 100,000-mile/36-month warranty. 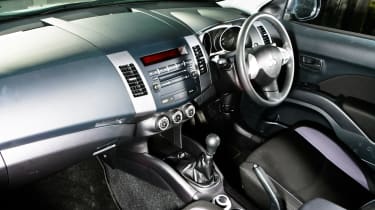 With 149bhp and 380Nm of torque, there's plenty to keep the Outlander moving, even with its greater weight. It’s good to drive, too, with decent handling and road holding. Although there is an automatic option for the Outlander car, it's not available with the 4Work, leaving a six-speed manual gearbox as the only option. Automatic stop-start is standard too.

Mitsubishi has given the new Outlander a new dashboard compared with the previous model, incorporating new instruments and switchgear. Features include a selectable eco mode, activated with a dashboard switch, which reduces available torque to improve fuel economy. Cruise control and a speed limiter are also included.

The driver can switch between drive modes, including auto and lock. Eco is mostly two-wheel-drive, auto selects two or four-wheel drive as required and lock manually locks four-wheel drive for difficult conditions. There's tilt adjustment for the steering wheel, but enough driver-seat adjustment to compensate for that.