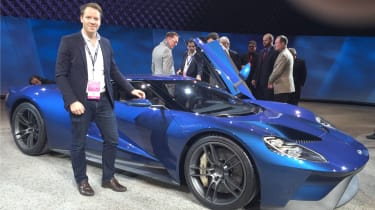 The 2015 Detroit Motor Show has seen an array of amazing new cars revealed and, as usual, the Auto Express team was there to bring you the news as it happened. But which new metal really set our pulses racing?

Below you'll find the pick of the best cars at the 2015 Detroit Motor Show as chosen by the Auto Express team on the ground. The big hitters are all here with explanations of what makes them stand out by the journalists who've seen them in the metal.

If any manufacturer out there wants a lesson in how to reveal a new car, speak to Ford. When the new Ford GT rumbled onto stage at the Cobo arena it was the first time anyone in the world outside Ford had clapped eyes on it. And Ford’s CEO didn’t waste any time confirming it wasn’t just a concept - it will make production at the end of next year.

With formalities out the way it was time to get up close and drink in the retro-inspired design, which from the front has plenty in common with its predecessor, but from the back makes a Lamborghini Aventador look plain. The real kicker though was no heavy, expensive hybrid powertrain to be seen – this is a 600bhp mid-mounted twin-turbo V6 sending power to a pair of tractor-like rear wheels. Nothing complicated, just real American muscle done to perfection. 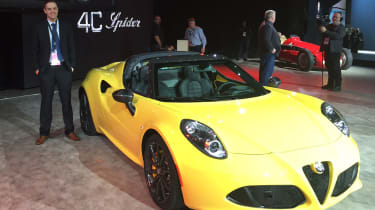 8
I'm not one of those motoring hacks who gets misty eyed at the mere mention of Alfa. Frankly, I think it’s been living off past glories for too long. But even I couldn’t fail to be seduced by the good looks of the 4C Spider at Detroit. Removing the roof has only added to its appeal, and with a negligible weight gain the Spider shouldn’t be too different to drive than the coupe – although given all the compromises that involves, that’s probably not the most ringing endorsement.
I’m still sceptical about the company’s recovery plan, and it will have to work hard to succeed as it plans to relaunch in the US. But you can understand why there is so much goodwill towards the brand when it designs cars as stylish as this one. 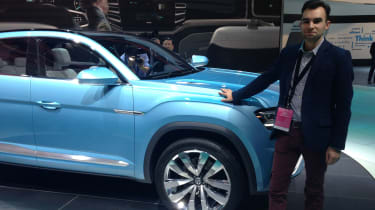 Yes, it’s another VW SUV concept but this one is more interesting. The Cross Coupe is a large, seven-seat SUV coming next year to America, and previews a massive effort by VW to fill the market with SUVs – because, say VW big wigs, that’s what customers all around the world want.

The Cross Coupe is a tad larger than a Touareg, but if it were to come to the UK it would sit under it. It’s a star for me because it also shows the next stage in VW design – crisp and, like most other VW designs, has the potential to be timeless. 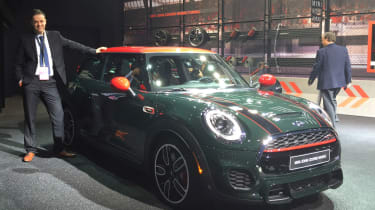 8
Amid the supercars, muscle cars, eco cars and pick-ups, one new star at Detroit which had genuine appeal for UK buyers was the new MINI JCW. Of course, we know how good the standard MINI is – we named it our 2014 Car of the Year– so the promise of its famous go-kart handling being allied to a 228bhp 2.0-litre turbo engine, with upgraded suspension, is truly enticing.
0-62mph is 6.3 seconds sounds pretty appealing too, and I thought the Rebel Green paintjob, exclusive to the JCW, looked fantastic. The US is MINI’s biggest market, and it was great to see a British-built car making a splash at the Cobo Centre. 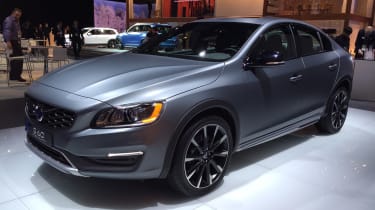 Opinions are mixed on this car in the Auto Express office. I was not particularly impressed with the official pictures of the Volvo S60 Cross Country published last week. Not for its looks but rather Volvo’s statements it adamantly believes the saloon crossover market exists.

While I’m still skeptical of this, it’s a star for me because, somehow, the design works well in the metal. Volvo launched the car in matt grey, and boy does it look butch – butch in a way an S60 can only ever dream about being. It’s a brave car and Volvo should be congratulated on producing it no matter what you think of it. 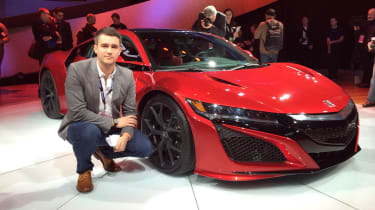 It’s more than 25 years since the original NSX was revealed to the car buying public, but that didn’t stop Honda – and American arm, Acura – reviving the nameplate for its new twin-turbo hybrid supercar.

In the metal it is dripping with intricate design details and cutting-edge tech. The aggressive front end and gaping air vents give it a sense of movement even when it’s standing still, while the thin A pillars and driver-designed cockpit make this a supercar you can use every day.

When Ford pulled the wraps off its new GT, we all worried the NSX would pale in comparison, but in all honesty I think this fire red Honda stole the show. 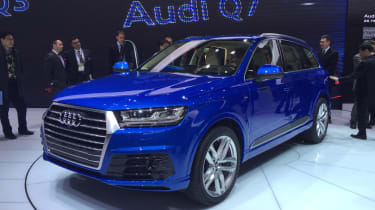 When I first saw pictures of the new Audi Q7 I didn’t like it - the design was too fussy and the proportions all wrong. On closer inspection I’ve been won over by the big Audi. The amount of sculpture in the front grille, headlights, even the alloys is phenomenal and, as is so often the case with Audi, you can sense the desirability oozing from its pores.

Inside there’s the same sculptural quality to the dashboard which combines craftsmanship with the latest technology, and you can’t argue with three rows of seats, or two rows and a massive boot. Clever as the plug-in hybrid e-tron model will be, I suspect the most efficient 3.0 TDI model will be the one to go for.

Do you agree with their choices? What would be your Detroit star car? Tell us in the comments section below...