New MINI JCW is the most powerful MINI ever with 228bhp, and has been revealed at the Detroit Motor Show 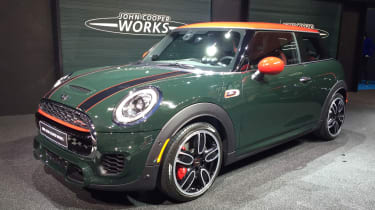 MINI is re-entering the performance market with a JCW version of its latest three-door hatch, revealed here at the Detroit Motor Show. Powered by a 228bhp 2.0-litre turbocharged engine, it’s the most powerful production MINI ever, and comes with upgraded suspension, steering, styling and brakes. Compared to its predecessor, the new JCW hatch produces 10 per cent more power and 23 per cent more torque, at 320Nm. As a result 0-62mph takes 6.3 seconds with the six-speed manual gearbox (0.2 second quicker than the old model) or 6.1 seconds with the options six-speed Steptronic auto. MINI claims the extra torque makes in-gear acceleration 10 per cent faster, too, with 50-75mph taking 5.6 seconds.

We already had a pretty good idea of how the JCW would look, thanks to the JCW concept shown at the 2014 Detroit show, and the production car has stayed faithful to its pumped-up design. Larger and protruding triple intakes distinguish the front end, while there is a JCW-specific rear bumper, roof spoiler, twin tailpipes and side sills.  The 18-inch John Cooper Works Race Spoke lightweight alloys you see here are optional, 17s come as standard. 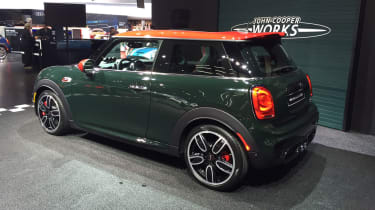 On the inside new bucket seats are not only more sculpted, but also finished in a quilted ‘Dinamica’ fabric, while the stainless steel pedals, instrument displays and key fob are all redesigned for the range-topping model. The optional head-up display has also been customised for the JCW with rev lights and a gear-indicator.

Although the MINI JCW doesn’t have four-wheel drive grip like its closet rival, the Audi S1, it costs £2,035 less and a host of chassis tweaks should make it the sharpest-steering MINI in the range. Firmer suspension (adaptive dampers are optional), a quicker electromechanical steering system and four-piston Brembo brakes all use lessons learned from its latest MINI Challenge race car. 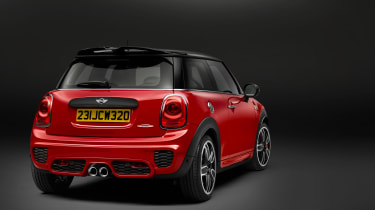 In terms of running costs, the JCW returns claimed fuel economy and CO2 emissions figures of 42.2mpg and 155g/km when fitted with the six-speed manual gearbox, and 49.5mpg and 133g/km with the optional Steptronic six-speed auto. Prices start from £22,865, with first deliveries in late April 2015. 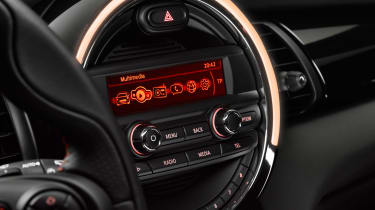