How many MINIs? The MINI range reviewed

Know your Roadster from your Paceman? Navigating today's 7-model MINI line-up isn't easy but here's everything you need to make your pick 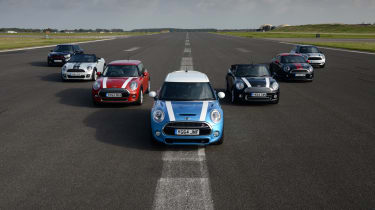 When the new MINI launched in 2001, it was offered in a single bodystyle, just like the fifties original, but today the range has grown to include seven different shapes.

The standard three-door still forms the backbone of the range, while the five-door adds a shot of practicality. The Countryman and Paceman crossovers repackage the MINI design into more family friendly forms, even being offered with four-wheel drive.

And if you want some driving fun, then there are the sporty MINIs. The Coupe is a practical two-seater that delivers fun handling and great performance, while the open-top Roadster and four-seat Convertible serve up open-air thrills.

In this mega test, we’ve taken a look at all seven bodystyles, and picked the models that represent the ‘sweet spot’ in each range. 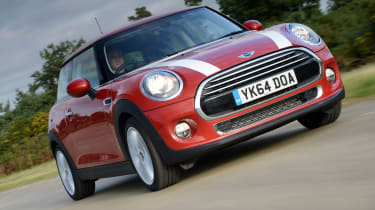 This is the car that made the MINI success story possible. Launched in 2001, the three-door combined compact dimensions and classless appeal like the fifties original, so it was as at home doing the weekly shop as it was whizzing around Sloane Square.

Now in its third generation, the cheeky British machine is as brilliant as ever. You get the same retro-themed design, fun driving dynamics and endless personalisation options, but the latest version has benefited from a much-needed dose of big car refinement, plus an interior that oozes premium appeal. As a result, it scooped the coveted Car of the Year trophy at the 2014 Auto Express New Car Awards.

At the heart of the MINI’s appeal is a line-up of three-cylinder petrol and diesel engines that effortlessly delivers perky performance and penny-pinching running costs. In addition, the car’s agile and engaging handling allows drivers to savour every journey. Yet the latest MINI has a sensible side, too.

The cabin is bigger, the car’s a refined and comfortable long-distance cruiser, and available options include adaptive cruise control and LED headlamps. On the evidence of the latest, multi-talented three-door, original is still best. 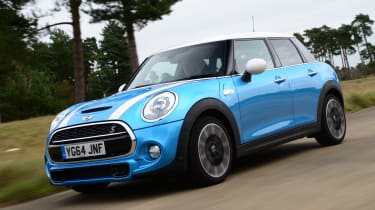 If you’ve got the MINI bug, but also have to accommodate a growing family, then the all-new five-door will be just the ticket. Underpinned by a stretched version of the brand’s advanced UKL1 chassis, the versatile newcomer is every bit as stylish and fun to drive as the original, but with the added bonus of an extra pair of doors and a reasonably roomy 278-litre boot.

That means you can comfortably accommodate chunky pushchairs and bulky travel cots, plus loading small children into the rear isn’t back-breaking work. There’s even enough legroom to accommodate a couple of adults. And, once you’re on the move, the longer wheelbase helps to deliver a more composed ride.

As with the three-door, there’s a wide range of engines to choose from, but the pick of the bunch is the smooth 134bhp 1.5-litre three-cylinder petrol in the Cooper, which blends punchy performance with 60.1mpg fuel returns.

And because the five-door is first and foremost a MINI, it never fails to raise a smile out on the road. The handling is beautifully balanced, the major controls are brimming with feedback and there’s plenty of grip. Having a family has never been this much fun. 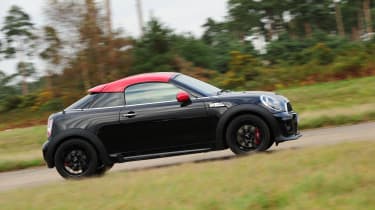 The MINI has always been a stylish choice, but the eye-catching Coupe takes the car’s kerb appeal to the next level. With its two-seater layout, low-slung stance and distinctive roof design, the bold British machine still turns heads three years after making its debut.

Happily, there’s plenty of substance to back up this style, especially on the flagship John Cooper Works model. Packing a hefty 208bhp punch, a near-150mph top speed and an uprated suspension set-up, the JCW is like a double espresso on wheels, delivering a big hit of adrenaline in a tiny package. You know this car means business the moment you sit in the heavily bolstered seat and grip the chunky, Alcantara-trimmed wheel.

Performance from the 1.6-litre turbo is addictive, as is the blare from the exhaust, and the Coupe can be flung through corners with precision. There’s some aggressive tug from the wheel over bumpy surfaces, although that only adds to the raw driver thrills. But the Coupé is also practical. The interior is comfortable, well made and crammed with kit, while the hatchback tailgate adds a dash of versatility. The running costs are low, too. 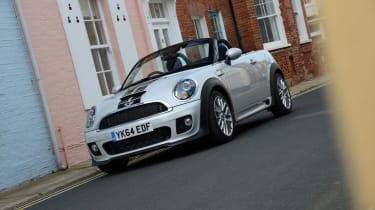 Based on the distinctive Coupé, the compact two-seater drop-top is the spiritual successor to the affordable British roadsters of the sixties. Yet, unlike its famous forebears, this MINI is packed with the sort of creature comforts normally reserved for an executive saloon.

But when you’re blasting down a twisting back road, it’s the size of your smile that counts, not the amount of kit – and the MINI doesn’t disappoint. The Roadster’s line through a corner can be subtly adjusted with a blend of steering and throttle, while the 1.6-litre turbo in the Cooper S punches above its weight. And with the fabric roof lowered, you’re closer to the twin-exit exhaust that pops, bangs and crackles on the overrun.

This focused driving experience doesn’t come at the expense of everyday usability, either. The electrically powered roof can be raised in seconds to created a snug and weatherproof cabin, while the boot will swallow a useful 240 litres of luggage. And the Roadster won’t cost the earth to run, with a claimed 47.1mpg. 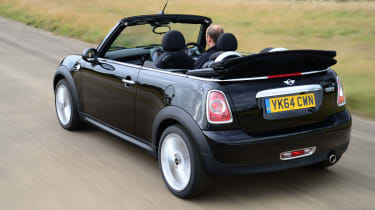 MINI first lifted the lid on its fashionable three-door hatch in 2005. Providing the same cheeky looks and nimble handling as the standard car, but with a fresh-air twist, this desirable drop-top was an instant hit.

The second-generation version arrived in 2008 and proved to be every bit as popular. With its eye-catching looks, four-seater layout and low running costs, the Convertible is a cost-effective cabrio for buyers with a sense of style. And while the focused Roadster is designed for pushing on along back roads, the Convertibleis a more laid-back machine aimed at buyers wanting a relaxed cruiser. That’s not to say this MINI doesn’t have a sense of fun, though.

Compact dimensions and responsive controls mean it’s nearly as entertaining as the standard car through bends, while the Cooper’s 1.6-litre petrol is an eager performer. And as with any MINI, you can customise the car to your heart’s content. Another neat touch is the dash-mounted roof timer that lets you know howlong you’ve been exposed to the elements for.

Cramped rear seats and a meagre 125-litre boot capacity count against the Convertible, but you’ll soon forget these flaws when the roof is down and the sun is shining. 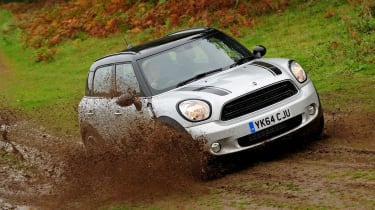 The cheeky MINI has always been king of the urban jungle, but with the Countryman the brand was able to break out of the city and head into the unknown.

Featuring scaled-up MINI styling cues and a raised ride height, the chunky Countryman makes no bones about its go-anywhere potential. More importantly, the rugged looks are backed up by a sophisticated four-wheel-drive system. The electronically controlled set-up automatically sends power to the axle with most grip, allowing the Countryman to venture further off the beaten track than you’d ever have thought possible.

Happily, this ability in the rough stuff doesn’t come at the expense of on-road agility, because the MINI feels poised and planted when you hit the tarmac. Plus, the all-wheel-drive transmission runs in front-wheel-drive mode to boost efficiency.

The five-door Countryman is practical, too. Not only is there room for five in the upmarket interior, the well shaped boot will swallow 350 litres. And if you go for the frugal Cooper D, you’ll benefit from running costs that are more supermini than SUV. 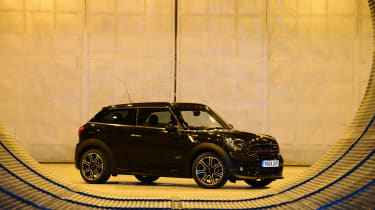 With its bold mix of coupé lines and high-riding SUV stance, the Paceman follows in the wheel tracks of fashionable cars such as the Range Rover Evoque and BMW X6. Unlike these upmarket machines, you won’t break the bank to buy and run the MINI, but that doesn’t mean the Paceman is some bargain-basement special.

For starters, the head-turning exterior styling is matched by a classy cabin. Top-notch materials are used throughout, the fit and finish are excellent and the retro design is pure MINI.

And, while it’s a strict four-seater, there’s just enough room in the back for adults to travel in reasonable comfort. A hatchback and 330-litre boot complete the car’s family friendly credentials.

Of course, the trend-setting model is a MINI at heart, meaning it’s as fun as it’s fashionable. Meaty steering, tenacious grip and strong body control give the Paceman genuine driver appeal, while the muscular 2.0-litre diesel makes the Cooper SD a fast and frugal choice. And the grippy ALL4 four-wheel-drive version turns the fashionable Paceman into a MINI for all seasons.

Has MINI gone too far with a seven model range? let us know your views in the comments section below...