Paddy Hopkirk and the Mini that won the Monte Carlo Rally

We meet Paddy Hopkirk on the 50th anniversary of his 1964 Monte Carlo rally victory, which launched the Mini legend 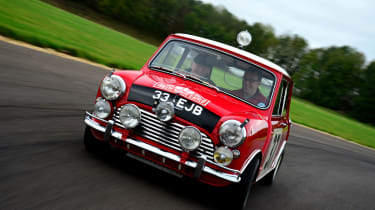 Nearly every iconic brand has a moment when it enters the public consciousness – a moment that’s remembered and resonates long after it happened. Arguably, for Mini that point came in 1964, when 31-year-old Paddy Hopkirk and his co-driver Henry Liddon won the Monte Carlo Rally.

Having started behind the Iron Curtain in the Arctic temperatures of the Russian city of Minsk, they excelled on the treacherous Alpine passes, before victory in glamorous Monaco propelled Paddy and the Mini into the A-list of ‘swinging sixties’ British cool.

Flown back to the UK to appear on Sunday Night at the Palladium with Bruce Forsyth and to be interviewed by the BBC’s Raymond Baxter, Paddy received a telegram from Prime Minister Sir Alec Douglas-Home and a signed congratulatory photo from the Beatles. The publicity steam train saw Paddy tour BMC factories across the country and give countless interviews. The Mini quickly became the iconic sixties car. 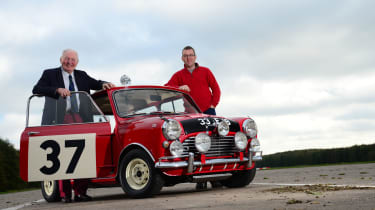 Meeting Paddy and a superb recreation of his winning car 50 years later, it’s clear how much the memories of this victory mean to him. Paddy explains that “we weren’t just promoting Mini by winning; we were selling British goods of every kind. A Mini win was a British win; we were winning for the country”.

A world away from the super-modified rally cars of today, sixties rally cars were closely related to their road cousins, so arduous long-distance rallies were the perfect advert for a car’s durability, handling and performance.

“It was the hand-built attention to detail that the BMC rally team lavished on the Minis that set them apart from cars that came down the production line,” says Paddy. Sitting in the car today, it’s amazing how close to the road it feels, but it’s hard to imagine the bravery and skill needed to drive it on the limit in the era before roll cages, let alone the endurance required for the regulatory long road sections of sixties rallying. 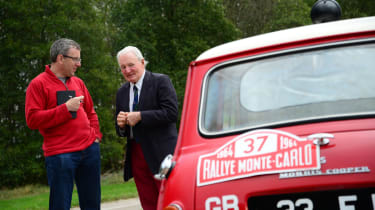 With a 1,071cc engine, the Cooper S produced around 70bhp and revved to over 6,000rpm. Paddy remembers that “the Mini wasn’t so good uphill but was amazing downhill”. Thanks to its diminutive size and novel (for the period) front-wheel-drive layout, it had an agility its bigger and more powerful rivals could only dream of.

Driving the car today, the distinctive whine of the straight-cut gears echoes around the cabin and, with its twin carburettors, the throttle response is surprisingly spirited. Even at the steady speeds needed for photography, the Mini’s famed innate connection with the road is clear. And the bank of front spotlights and distinctive combination of red paint and white roof provide the original and definitive ‘Mini look’.

So, while the ’64 Monte winner is a world away from today’s MINI, it unquestionably created the legend and reputation for agile handling on which the modern MINI is built. Today’s success owes much to Paddy Hopkirk and his team-mates of 1964.

Rallying in the Sixties 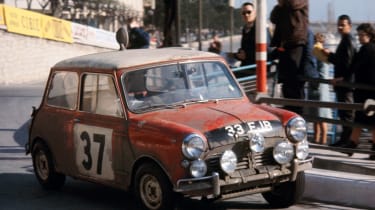 Half a century ago, rallying was very different, with none of today’s centralised servicing and relatively short special stages. Cars competing in the Monte Carlo Rally would start at various European cities, covering vast mileages at a set average speed, before converging in France for the competitive legs.

In 1964, for instance, crews departed from Minsk, Paris, Glasgow, Frankfurt, Athens, Warsaw and Lisbon. The entry saw no less than six BMC factory-entered Minis, with a further 24 Minis driven by privateers.

In the early legs of the rally, more powerful cars headed the Minis but, with the advantage of ice note crews scouting the route ahead of the drivers to report on road conditions, the team made good use of its Dunlop tyres, to take the upper hand in the thick snow of the famous Col de Turini stage – setting up a famous victory that’s still talked about half a century later.