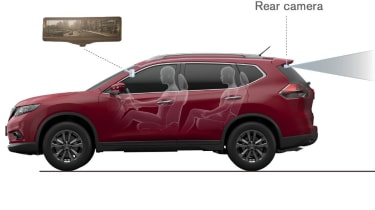 Nissan will unveil its new Smart rearview mirror technology at the Geneva Motor Show, alongside the Nissan Juke facelift, the Nissan BladeGlider concept, and the production version of the Nissan e-NV200 van.

The new system uses an LCD screen to relay images from a high-resolution camera located at the rear of the car. The screen and camera combo allows for an unobstructed view of the road behind the driver, regardless of tall passengers or excess amounts of luggage.

A video-based rearview mirror is not a new idea – the technology has been a mainstay on concept cars for years, but has so far failed to become a common feature on real-world vehicles.

But Nissan says the Smart rearview mirror will change that thanks to a number of innovative touches.

First off, it allows the driver to switch between the high-definition camera view and the standard mirror – meaning that should something go wrong with the LCD screen, the driver can still see out the back.

Secondly, the screen and camera system has been developed to provide a crisp and clear image in all conditions. Traditionally these kinds of systems have suffered from glare during sunrise or sunset, or from the headlights of following cars during darker driving conditions. But Nissan says it has eliminated this issue.

The company certainly has a good track record when it comes to developing this kind of system. It developed the first Around View Monitor, which makes parking easier by providing the driver with a birds-eye-view of the car and its surroundings through creating a composite image by combing the feeds from four different cameras.

"Smart rearview mirror will give our customers the best possible view no matter how tall the passengers in the back seat, or the road conditions," said Andy Palmer, Chief Planning Officer and executive Vice President of Nissan.

"It also offers the possibility of new and exciting designs for our upcoming models because Smart rearview mirror is an alternative to a very wide rear window for good visibility. We'll have the flexibility to create new shapes, and to further improve aerodynamics for better fuel efficiency."

Nissan plans to incorporate the Smart rearview mirror in the ZEOD RC car that is set to compete in this year’s 24 Hour Le Mans, as well as in its other NISM race cars. It also plans to introduce the technology as an optional extra on its standard cars in Japan from this spring. We should see it in the UK some time in 2015.