Who said that squares can't be cool? Nissan's sensational new Cube mini-MPV, with its asymmetrical detailing and hard edges, proves even the most conservative shapes can be made to look seriously exciting. 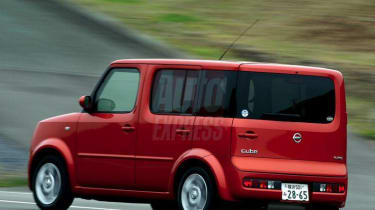 It's the way the car looks that really separates the Cube from the crowd. Though not the fast-est or most refined car we have ever tried, it's easy to drive, fuel efficient and spacious. It's not available here yet, but Nissan admits it is keeping a close eye on the Cube - so if you want one, go and lobby your local dealer.

Who said that squares can't be cool? Nissan's sensational new Cube mini-MPV, with its asymmetrical detailing and hard edges, proves even the most conservative shapes can be made to look seriously exciting.

Currently topping the sales charts in Japan, the Cube is available in two specifications. The entry-level edition has front-wheel drive and a 1.4-litre petrol engine, while the four-wheel-drive flagship offers the same 1.4 unit combined with an electric motor to power the rear wheels.

We tested the latter, named the Cube e-4WD. Capable of around 115mph and covering 0-60mph in 13 seconds, it's aimed at the Honda Jazz and Vauxhall Meriva. However, the key weapon in the Cube's arsenal is not performance - it's choice. More than 24 colour combinations are available, and buyers can choose metallic, pastel or matt finishes. There's even the opportunity to have the car painted in petrol giant Gulf's racing colours of orange and powder blue. Inside, the car offers seating for four adults, as well as luxuries such as climate control and satellite navigation.

Other hi-tech features include extras that have already appeared on the UK's Micra, such as keyless entry, electric windows and xenon headlamps, which are all standard. Unique to the Cube, though, is the electric all-wheel-drive system, which can be activated by a dashboard switch.

On the road, the Cube's extensive glass area offers great visibility, particularly when reverse parking. The short overhangs and tight turning circle make urban driving a doddle as well. Only the side-opening rear door detracts from the practicality, as the space on offer in the back of the car is actually rather generous.

Throttle response is good, and the CVT gearbox is efficient. However, Nissan's engineers have added steps to the ratios to make the system feel more like a conventional auto. As a result, during motorway cruising the unit is a little indecisive, particularly on shallow gradients. And, despite the aerodynamics, the car is surprisingly comfortable at speed. Although the engine is relatively loud, the lack of wind and road noise is impressive.

If only the same could be said of the steering. The speed-sensitive power assistance is intended to increase feedback as the pace rises. Unfortunately, it doesn't quite hit the mark and feels artificially heavy compared with rivals currently available in the UK.

Yet that is our only major concern, as the car is fun to drive, great to look at and, most importantly, a practical proposition. Costing around £15,000, this high-spec model isn't cheap, and the entry-level version is better value. While Nissan says it has no plans to bring the Cube to these shores, we're confident it will change its mind.