Dear Mr Harris, at last you can stop writing us letters. Ever since Nissan's Cube first appeared in Auto Express, we've had scores of readers asking when the car would be imported to the UK. But by far the most dedicated was a certain Mr Paul Harris from Northwich in Cheshire. 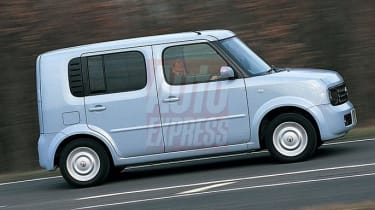 It's the Cube's looks that separate it from the crowd. It isn't the fastest or most refined car, but it is capable in other areas. Easy to drive, economical and spacious, it fulfils the tough criteria by which all mini-MPVs are judged. Nissan is monitoring UK interest: if you want one, tell your dealer. If you can't wait, call Intercar.

Dear Mr Harris, at last you can stop writing us letters. Ever since Nissan's Cube first appeared in Auto Express, we've had scores of readers asking when the car would be imported to the UK. But by far the most dedicated was a certain Mr Paul Harris from Northwich in Cheshire.

Nearly every week, he has been requesting updates about when the car would be coming here - and we have some good news for our postman. You can now buy a Cube through a UK importer - and we've driven it.

So what causes this sort of obsession? With its asymmetrical windows and hard-edged bodywork, the Nissan is certainly striking. The 1.4-litre machine has topped the sales charts in Japan, and starting at around £7,000 in its domestic market, it has proved that adventurous design sells.

Currently, the Cube is available in two specifications. The base car driven here offers front-wheel drive and an 88bhp petrol engine, while the flagship has four-wheel drive, using an electric motor to power the rear axle.

Capable of a 115mph top speed and a 13-second 0-60mph sprint, the Cube boasts a huge and versatile cabin. The front bench includes a large central armrest hiding two stowage bins. Driver and passenger seats can be adjusted independently and both offer lots of head and legroom. There is an extra shelf in the dash, and more storage space under the chairs.

The rear seats accommodate two adults, and can slide back and forward or be individually folded. On the road, the Cube's glass area offers great visibility. A tight turning circle and short overhangs make town driving a doddle. Reverse parking is aided by the extended glass area on the left-hand side, and only the barn-door-type boot opening detracts from the practicality. The load space itself is impressive, though.

But to turn the Cube into a truly great car for the UK, the driving experience needs a dose of refinement. There is a lot of engine noise, particularly under acceleration. The electric power-steering feels lifeless, and needs constant correction to keep the car on the intended line. Fortunately, there is a surprising lack of wind and road noise, and at 70mph the four-speed automatic box keeps things ticking over at 2,500rpm.

However, the car is currently available only as an unofficial import from London-based Intercar International. Shipping costs and taxes push base machines to around £11,000, which is still good value for a model that turns more heads than a Lamborghini.

Nissan refuses to make a decision on bringing the Cube here officially, but with more people like Mr Harris making a fuss at their dealer, the firm surely can't hold off for much longer?