As we say bye to boxy baby, have we got to the square root of its appeal? 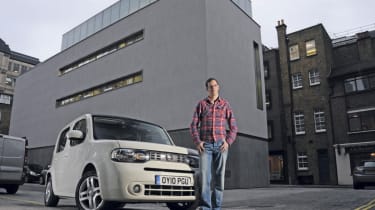 Boxes aren’t just incredibly practical. The iconic Rubik’s Cube of the Eighties entertained millions, while the White Cube Gallery at Mason’s Yard in London is a striking piece of architecture – as you can see from our picture.

I’m more familiar with the car in the foreground, though – and after eight months in its company, I think Nissan’s Cube is another great box. It has kept me entertained, and like the building behind it, turns plenty of heads. With its blacked-out rear windows and asymmetrical styling, the car really stands out from the crowd.

The square shape has obvious benefits when it comes to space, too, and the Cube has been a perfect companion for me as the magazine’s consumer writer. Every week, I test products ranging from sat-navs to car jacks, and the boxy dimensions and spacious interior have easily accommodated all my kit. Plus, while I expected the quirky side-hinged tailgate to prove a pain, you soon get used to it and plan your parking strategically to make the most of it.

The past few months haven’t been quite as kind to the Cube, as its optional pearlescent white paint has been near impossible to keep clear of winter grime. Still, the experts at Autoglym helped to restore its shine once the worst of the weather had passed. And from the comfort of the interior, I’ve been able to forget the constantly dirty bodywork and concentrate on our Kaizen model’s huge spec.

This includes Bluetooth, sat-nav, iPod connection, automatic lights and wipers, a reversing camera, ESP and six airbags. Passenger space isn’t an issue, either. You can create more legroom or boot capacity using the sliding rear bench, which gives the Cube supermini-MPV like practicality. Visibility from the airy cabin is great, too, and the glass roof lets in lots of light. I expected to have difficulty squeezing my six foot seven inch frame in, and getting comfortable, but the seat and steering wheel have a wide range of adjustment. There are compromises, though. While the shape boosts space, the upright screen is prone to stone chips, and road noise and wind buffeting are issues at speed.

It’s not a car for keen drivers, either; it suffers from plenty of body roll in corners and the 1.6-litre petrol engine could use a bit more power for hills – as well as a sixth gear. The latter would aid both refinement and economy, as I’ve never managed to get close to Nissan’s claimed combined figure of 42.8mpg.

In fairness, my largely urban commute is partly to blame, but an overall average of 30.4mpg isn’t great. I think I’m ready for a car that grabs less attention – although I was sad to hear Nissan is axing the Cube from its line-up (as we reported in Issue 1,149).

You can get a £5,000 discount on one of the few remaining new examples, but that’s not such good news for existing owners. A call to a dealer for our recent End of the Road feature (Issue 1,151) revealed that our 10-month-old model is now worth only £7,500 as a trade-in – less than half its original price!

Still, if you want a car that’s guaranteed to get you noticed, look no further...