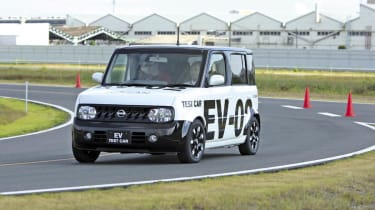 Nissan has lost ground to Toyota and Honda in the green transport stakes – the firm does not have a hybrid on sale in the UK. But the Cube EV shows it’s well on the way to delivering viable electric cars to showrooms in the next few years. This prototype still has some development ahead of it, but already the performance is impressive.

Bosses at Nissan are urging buyers to think square to cut their fuel bills. This is the Cube EV, an electric supermini that previews a zero-emission car from the Japanese firm. Auto Express drove it this week.

The Cube is already apopular grey import to the UK, and an all-new version officially goes on sale here within the next year. Engineers have used the current model as a test bed for a uniquely styled electric car.

The EV sits on a standard Cube platform, but is packed with state-of-the-art Nissan technology, including new lithium-ion batteries.

Despite being half the size and weight, they deliver twice the power of nickel-hydride batteries, store double the energy and offer a longer range. Nissan’s goal is to improve the car’s 60-mile capacity to 100 miles by 2010.

The batteries can be ‘speed-charged’ in around 15 minutes to 80 per cent of full capacity, or plugged in overnight.

On the move it’s surprisingly quick – and satisfyingly quiet.Torque arrives instantly, and without any gears the little Cube is quicker than a hot hatch to 30mph. It alsoaccelerates from 0-60mph in around seven seconds.

Even though it’s more than 200kg heavier than the standard model, it manages to corner smartly. Larger brakes ensure it stops well, too.

With so much attention focused on petrol hybrids and hydrogen-powered fuel cell cars as the next step in mobility, it remains to be seen whether Nissan can make a serious splash in the market with its electric vehicle programme. But if the Cube EV-02 is any gauge, we have a lot to look forward to.