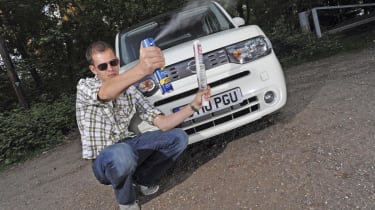 Forget fly swats, rolled up newspapers and expensive aerosols. If you want to kill some bugs, buy a Nissan Cube! The latest addition to our long-term fleet has just arrived, and it has already turned me into Mr Nasty...

Before I go any further, let’s get one thing straight; I love animals. I’ve always had pets, and I’m a big softie when it comes to dogs in particular. But while our Kaizen-spec Nissan Cube doesn’t look as aggressive as some of the other vehicles on our fleet, its attention-grabbing looks are bad news for insects.

I discovered this during my first long drive in the 1.6-litre supermini, as its bluff front end and near vertical windscreen accounted for hundreds of insects on the trip. As a result, its optional pearlescent white paintwork is often peppered with road kill, so summer promises to be a busy time for my bucket and sponge!

The trade-off is a car that looks like nothing else on the road; I absolutely love the Cube’s boxy proportions and slab-sided outline. The asymmetrical wraparound rear window is another neat touch. And when you’ve had enough of admiring the exterior, the car’s interior is home to lots of toys. A panoramic glass sunroof, reversing camera, cruise control, speed limiter, steering wheel controls and a Bluetooth hands-free system all come fitted as standard. The styling of the cabin is sure to divide opinion, though – my girlfriend thinks it looks like a cross between Postman Pat’s van and the Starship Enterprise. But whatever you think of its visual appeal, it’s a practical choice.

There’s loads of storage, and the sliding rear bench frees up valuable boot space when you’re not carrying any passengers in the back. Its 255-litre load area is deep, too, so it’s perfect for carting around all the products that I test for Auto Express.

It’s not faultless, though. For a start there’s a high lip, which makes unloading heavy objects a bit tricky. And then there’s the side-hinged tailgate. It’s huge, and makes accessing the boot in tight spaces a real pain. I don’t understand why Nissan didn’t fit a conventional tailgate instead.

So far, I’ve been pleasantly surprised by the Cube’s driving characteristics. It’s clearly no sports car and there’s plenty of body roll if you corner sharply, but the 1.6-litre engine is lively enough around town and visibility is excellent.

The Nissan’s boxy shape isn’t really suited to high speeds, as it’s hardly the most aerodynamic design, but cruise control helps to take the stress out of motorway journeys. The tall driving position also allows you to see far ahead, which is great if you’re trying to drive economically. I’ve already managed to achieve 40mpg on one trip – not bad for something shaped like a brick!

The overall average is lower – 29.7mpg to be precise – yet this is largely down to the amount of urban driving I do, and I’ll relish the chance to go for a few longer trips in the Cube. ButI’m not looking forward to cleaning off the bugs afterwards!

“I was won over by the car’s styling. Its great visibility and easy-to-judge shape are great for nipping through traffic. But the huge rear door means that you have to drive forward into parking spaces at the supermarket.”Tom Phillips Staff Writer