As boxy baby finally arrives, we see if it’s big in the city... 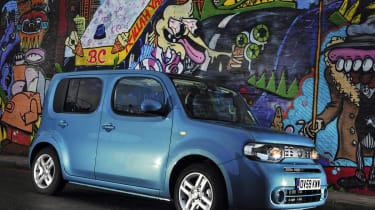 The likes of the MINI and Fiat 500 are so common, they’ve lost their off-the-wall appeal – yet the Cube has it in abundance. While it’s no driver’s car, the Nissan is a great town runabout. Plus, there’s plenty of scope for customisation, thanks to interchangeable graphics and options such as a shag-pile dash! It’s a welcome breath of fresh air in a sensible world.

Bosses at Nissan are squaring up to the big boys! The firm is taking on established fashion-conscious hatchbacks such as the MINI and Fiat 500 with its extravagantly styled new Cube.

The boxy model was launchedin Japan in 1998, yet despite its popularity it was never brought here officially. Imported Cubes have built up a cult following in Britain, though, and Nissan is looking to cash in on this, with the first right-hand-drive UK cars on sale now. Take one look at that obscure design and you’ll either love it or loathe it. The Manga-style, squared-off body and tall, angular dimensions are sure to turn heads, as is the raft of quirky functions.

The Cube’s boot is hinged on the right-hand side, so it opens like a conventional door. This is meant to aid loading, but limits access in tight spaces.

Inside, the layout is like nothing else on sale. Nissan designers claim to have taken inspiration from a jacuzzi, which explains the swirling dashboard, along with the water-drop pattern that appears on the rooflining, speaker grilles and other surfaces. The plastics have a cheaper feel than in some rivals, but the interior is still robust and well built.

The soft, sofa-like seats come in black or beige faux-suede – or chocolate brown on the 500 limited-edition Lounge Design cars. Plus, the rear bench slides back and forth by 240mm to increase legroom or boot space.

By far the Nissan’s most unique feature is the disco lighting in the driver and passenger footwells – it flashes and changes colour constantly while you’re in the car. Add to that a three-way panoramic glass roof, and the cabin is really dazzling!

Thanks to the Cube’s vertical dimensions, the driving position is high and visibility is excellent. However, those brick-like aerodynamics also make wind noise an issue at speed – but Nissan is happy to admit that the Cube is more at home on city streets than on motorways anyway. It’s a similar story when it comes to performance. The 108bhp 1.6-litre petrol engine needs a good work-out to get the Cube moving. Bring up the revs and pace is reasonable – 0-62mph takes 11.3 seconds – while the five-speed manual gearbox gives quick and precise shifts.

A smooth CVT transmission is also available, and a 1.5-litre diesel with a six-speeder will join the range in June.

Nissan’s designers have done a great job with the Cube. There’s nothing like it on the market, so it’s bound to go down a storm with buyers who want something a bit different. Although it’s nowhere near as agile to drive as a MINI or Ford Fiesta, that’s not the point. The Cube is all about image and individuality – and if these are your buying priorities, it’s an ideal choice.

The MINI is fantastic to drive and it has some of the best residual values around – but its popularity could also be its downfall. The sheer number of models on UK roads means it lacks the Cube’s exclusivity.