In our second report on the boxy Nissan, we take it to meet the original Cube and find out how the two compare. 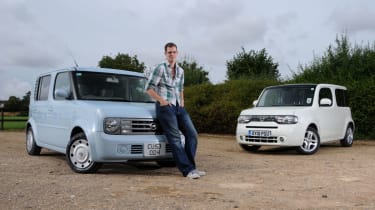 The Nissan Cube arrived in Europe late last year, but it isn’t the first generation of the company’s boxy supermini. Its predecessor secured cult status in this country as an import, before Nissan brought the latest model here officially – and I was keen to see how the two compare.

Lining up against our white long-term car is a long-wheelbase seven-seat Cube3 belonging to Michelle Smith, from Stamford, Lincs. It began life in Japan in 2003, but was shipped to the UK and picked up by Michelle in January last year. And you can see what made it such a hit...

To my eyes, the old Cube is more stylish than its replacement, with boxier looks and a more distinctive front end. It comes with plenty of technology, too. There’s a centre-mounted reversing camera – the one on our car is offset.

I even prefer some elements of the old model’s interior. The column shift for its CVT gearbox and foot-operated parking brake free space between passenger and driver for a pair of useful storage bins – one under the seat and one in the armrest. The two fold-flat seats in the boot add even more practicality, while you can’t get a long-wheelbase version of the new car.

But that’s not to say things haven’t improved in other areas. “While I’d miss the gearstick and bench, I like the new model’s plush interior,” said Michelle. “And it does have extra oomph from its engine – mine’s only a 1.4-litre, and means overtaking is out of the question.”

Although our car’s more rounded shape and less quirky styling make me lust for an older Cube, I’m not sure I could cope with the latter’s smaller boot when all seven seats are in use. Plus, I prefer the single, deep storage bin in the dashboard of the latest version to the earlier car’s neat double glovebox.

Living with our Cube hasn’t been simple, though. While it’s easy to forget the wild design from the inside, the stares from passers-by are hard to ignore – you need a thick skin to drive this car in built-up areas. Still, this might appeal to some motorists – the bright white supermini makes an entrance without resorting to a loud exhaust and huge alloys.

The one downside of the bluff front end is that it’s prone to picking up stone chips. The journey to Lincolnshire to meet Michelle and her Cube added to our Nissan’s rocketing mileage, and I’m happy to report that fuel economy is improving – we are now returning around 35mpg. This is no doubt aided by the standard cruise control, which is ideal for long A-road and motorway runs.

Would I be tempted to switch to Michelle’s car? Well, the latest model isn’t only faster and more luxurious than its predecessor, as an official UK model, it also gets Nissan dealer back-up. But I could still be swayed to a tidy example of the old Cube if the price was right!