The Nissan Juke Acenta has plenty of tech, so it's likely to be a popular model 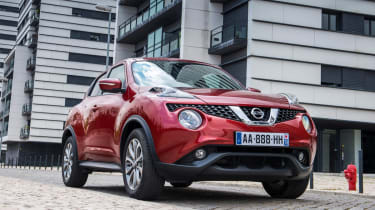 The new Nissan Juke Acenta is likely to be a very popular version of the company’s latest incarnation of its compact crossover. Launched in 2011, the Nissan Juke created a whole new segment in the market, and spawned a breed of supermini-based SUVs which now include the likes of the Vauxhall Mokka, Peugeot 2008 and Renault Captur.

Buyers of the mid-spec Juke Acenta have a variety of engines to choose from, starting with the small capacity turbocharged 1.2-litre petrol. This engine has been borrowed from the company’s larger Qashqai range - however, it’s a much better fit in the Juke, due to the car’s lighter weight and smaller dimensions. There’s plenty of power when you need it and it’s generally very refined around town and at speed.

Nissan also offers the larger-capacity 1.6-litre 115bhp petrol engine in its Acenta range. However, opting for this variant means you’ll seriously compromise fuel economy and incur higher road tax, as it only comes with the Xtronic CVT gearbox. 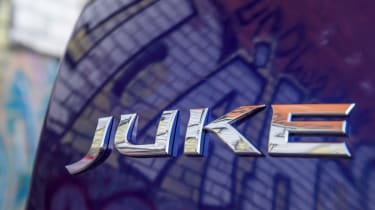 Our pick of the Nissan Juke Acenta engine range would be the efficient 1.5-litre dCi diesel. It’s the cleanest of the three engines, emitting only 104g/km of CO2 - meaning a paltry £20 a year road tax, and with its claimed combined figure of 70.6mpg it makes a lot of sense for the cost-conscious buyer.

While the Nissan Juke Acenta can't match a traditional hatchback’s driving dynamics due to its taller SUV style body, it's still pretty decent to drive and is quite comfortable on the open road. Around town, the Nissan Juke Acenta’s light steering makes driving straightforward. But it provides very little feel on the twistier B-roads, and suffers from a degree of body roll when cornering.

Undoubtedly, the Nissan Juke Acenta is a little car filled with bags of character, and thanks to its frog-eye front end and wide grille, the Nissan Juke is a purposeful looking car, which has already won many fans. Nissan has carried on the Juke's striking looks to its back end, giving it a set of boomerang-styled LED rear lights and a more aggressive bumper. 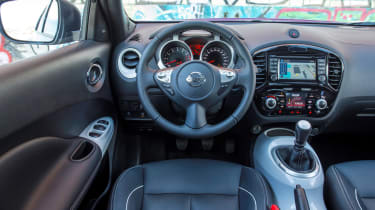 Despite its high driving position, the Nissan Juke Acenta isn't the most practical supermini-based SUV on the market, as a result of its sloping roofline significantly limiting rear headroom. But boot space has been increased by 40 per cent to now offer 354 litres, bringing it into line with its rivals. The seats do fold flat to increase that load capacity to 1,189 litres.

Some plastics inside the Juke Acenta’s cabin feel a bit cheap and lack the upmarket feel of the Volkswagen Polo - a car that you might also be considering. However, they should be sturdy enough to stand up to daily wear and tear. Fortunately, Nissan has placed plenty of useful cubbyholes around the interior, plus a deep glovebox and extra storage under the boot floor.

Nissan engines have in the past proved to be extremely reliable, and thanks to its five-star Euro NCAP rating, the Juke Acenta is also one of the safest cars around. Nissan also gives the Juke ESP, ABS and six-airbags as standard safety kit. And being a Nissan, the Juke's strong residual values should help keep lifetime running costs low.