Nissan's unloved supermini will be replaced by this all-new model next year. We find out how it stacks up in prototype form 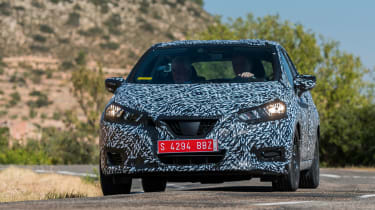 It’d be unfair to rate the new Nissan Micra on an early prototype drive, but the signs are strong. This is an important car for Nissan – and Nissan knows it, so the brand has toiled tirelessly with the new Micra to launch it back into the consciousness of supermini buyers. With excellent refinement, an impressively smooth ride, sharp styling and lots of equipment on offer with even more scope for personalisation, it’s going to be a contender.

The Micra was a revolutionary car for Nissan. The original Japanese supermini built the brand’s reputation for reliability, build quality and affordability in the UK, while the second-gen car followed this up with a European Car of the Year award. But in recent times Micra sales have stalled, as Nissan got lost in the doldrums with the positioning of the car, losing ground to more modern, practical superminis.

That’s all about to change, though, as the Micra is back – and we’ve driven this pivotal car for Nissan in early pre-production guise.

The Japanese brand has repositioned the Micra as a proper B-segment supermini, so unlike its smaller predecessor, this fifth-generation Micra is comparable to a Renault Clio in size – or 8cm wider, 6cm lower and 17cm longer than its predecessor. It means it’s much more practical, but Nissan is keen to point out that the new Micra will appeal to young buyers wanting style and comfort as much as those after a spacious small hatch. 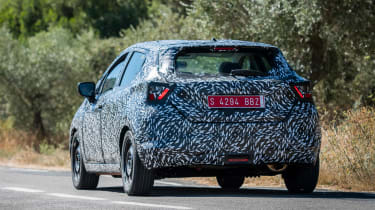 There’ll be three customisation packs that play on the ‘emotional’ aspects of the new Micra and give an ‘energising feel’, as Nissan’s head of product planning for Europe, Laurent Marion, is keen to point out. While this might sound like marketing speak, the new Nissan Micra really is a more appealing hatchback. Not least in the design.

It looks pretty close to the Sway concept unveiled at Geneva 2015, with the V-shaped grille, boomerang design lights and a floating roof – both Nissan design cues – and a general sharpness to the styling compared to curvy Micras of the past. It feels more grown-up to drive, too. We tested the 1.5-litre dCi turbodiesel and 0.9-litre turbocharged three-cylinder petrol, which both produce 89bhp. The diesel in particular is extremely quiet – to the point where even in 95 per cent-finished prototype form it’s vying for top honours in terms of refinement.

Nissan hasn’t released any performance figures yet, but expect the sub-1,100kg 1.5 dCi Micra to sprint from 0-62mph in less than 12 seconds. It feels fast enough, with decent pull from low down on the move thanks to 220Nm of torque, but it’s how Nissan has insulated that engine noise from the cabin is the really impressive point.

There was more final calibration work to be done on the 0.9 petrol we drove, and it didn’t feel quite as refined as the diesel, but given the Micra’s grown in size, there was enough performance available with either engine. A 74bhp naturally aspirated 1.0-litre three-cylinder petrol will join the range after launch, too. 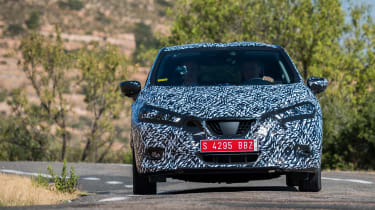 Alongside the power units, the Micra’s ride contributes to its relatively grown-up feel. Marketability manager Norman Snowdon told us this was a clear area of development with the new car; that Nissan wanted to focus on ‘secure comfort’, so the damping is plush, with a quality feel to the way the car rode our washboard test route. It’s easy to see that Nissan has zeroed in on bump absorption and stability in corners.

With different suspension settings for the petrol and diesel, the former felt a little firmer, while the latter was more composed over bad surfaces, ironing out lumps and bumps with finesse some other superminis struggle to match. The Active Trace Control and Active Ride Control systems used on the Qashqai come fitted as standard on the Micra to help the handling. They’ve been reprogrammed extensively for the car and work better than in Nissan’s crossover. It gives the new Micra a more natural feeling, subtly helping it lock onto a line in corners and smooth out the ride.

However, this softer side means the Micra isn’t the most agile car in its class. Nissan’s up front about not necessarily wanting it to be, so while the steering weight is nice it’s not quite as precise as a VW Polo. This was easy to tell, as Nissan brought a Renault Clio and a Polo to this early prototype drive for us to try.

This shows Nissan is confident, and it should be, as its new supermini is a contender is inside the cabin, too. From mid-grade trim and above, a seven-inch touchscreen with Apple CarPlay is standard, while the dash layout is simple and attractive. Material quality even in the prototype bodes well for the production car.

The extra length in the chassis helps deliver a settled ride, but it also means the Micra is roomy inside. It’s easy to find a comfortable driving position, with a good level of adjustment available, while leg and headroom in the rear is good. No boot space figure has been published yet but given the car’s dimensions, we’d expect it to rival the best in class. For reference, the Renault Clio boasts 300 litres, so we’d expect to Micra to serve up a similar amount of luggage space. 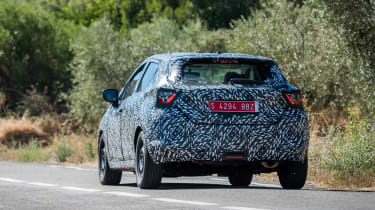 There’s lots of safety kit for a supermini, too. Autonomous braking is standard across the range, while pedestrian detection, lane departure prevention, blind spot warning, traffic sign recognition and Nissan’s around-view monitor are all available, so expect the Micra to score a full five star Euro NCAP safety rating.

Combining this practicality and safety with the Micra’s sportier styling should give it plenty of appeal. But the looks also give it competitive efficiency. That shape has been styled to keep the drag coefficient down below 0.3 (an aero-efficient Toyota Prius is 0.24), so the diesel should return 88.3mpg with CO2 emissions of 85g/km.

In one of the most competitive sectors of the European market, price will be key. We asked Merion for an indication of where Nissan will pitch the Micra’s price, and while he wouldn’t give us a figure, he did reveal it’d be targeted at the supermini heartland, rivalling the Ford Fiesta, Renault Clio and VW Polo, so expect the five-door only range to kick off from around £14,500 until the 1.0-litre arrives.