What happens when you cross an MPV with an SUV? That's a question Nissan's designers pondered in an ideas session a couple of years ago. The answer, they decided, was so good it had to go into production. And here's the result... the Murano. 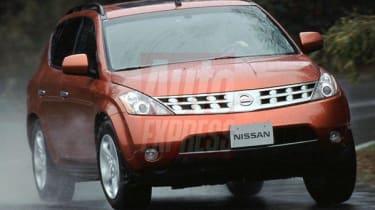 It's an interesting, innovative prospect, but we're not entirely convinced UK buyers will embrace the Murano for anything other than its looks. It has striking styling and is immensely practical, but the V6 engine and CVT transmission, although user-friendly, will really hit owners in the pocket.

What happens when you cross an MPV with an SUV? That's a question Nissan's designers pondered in an ideas session a couple of years ago. The answer, they decided, was so good it had to go into production. And here's the result... the Murano.

Unveiled at the 2002 New York Motor Show, the SUV/MPV hybrid is now a production reality. And Nissan's European bosses were so impressed with the finished product, they have decided to bring the car here in 2005.

When it reaches Britain, the Murano is expected to cost from £25,000, putting it close in price to upmarket versions of the popular X-Trail, but undercutting BMW's forthcoming X3.

At present, there's only one engine and gearbox choice available - a 3.5-litre petrol CVT - but when it comes to Europe, a diesel and a manual 'box will also be on offer. So is the Murano likely to catch on here? We got behind the wheel of a US car to find out.

The first thing that strikes you about the Murano is its size. It's an imposing beast, and even the base model comes with 18-inch wheels. The fat wheel-arches give it the look of an SUV, although the ground clearance isn't much higher than that of an ordinary car.

It's strikingly modern, though, with a neat chrome grille, angular headlights and rear lenses that sit flush with the swooping contours of the body. Inside, there are only five seats, but the back has legroom to rival Mercedes' S-Class and BMW's 7-Series.

The dash is neatly laid out, with an LCD screen in the facia and the stereo, ventilation and sat-nav controls in a metal-finish pod underneath. It all looks pretty funky, and with plenty of storage, the cabin is practical, too.

Power comes from the 3.5-litre V6 engine from the 350Z, which is free revving and punchy. The CVT gearbox saps power when used in its normal drive position, but in sports mode it holds the engine revs at their peak output of 5,800rpm, giving the Murano surprising thrust. But the price for thrust is thirst - don't expect to break the 20mpg barrier if you drive everywhere in sports mode. Until a more economical engine is sourced, this will reduce its appeal in the UK.