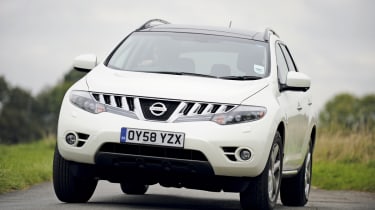 The Murano is just that bit too late for the UK market. Five years ago, when SUVs were at their peak, it would have made great sense and could have sold in big numbers. Now, though, group 16 insurance, CO2 emissions of 261g/km and that thirsty V6 engine count very much against it. If the promised diesel arrives in a couple of years, it could be a much better prospect.Rival: BMW X6THE flashy X6 has the edge over the Murano in terms of badge appeal. And crucially in this market, it’s available with strong yet frugal diesel engines.

Nissan’s latest evolution of the Murano is a slap in the face of the credit crunch. Featuring the juicy 3.5-litre V6 engine from the 350Z sports car, the big SUV blends power and luxury with a fresh exterior.

There’s a new front end, with the previously curvy headlamps being replaced by edgy, angled clusters. These now flank a bold, triangular radiator grille. Meanwhile, at the back, the tail-lights have been redesigned, while a lip spoiler and sculpted screen have been introduced.

Although it’s radically sharper on the outside, the engine and drivetrain haven’t changed as much. Torque has increased by five per cent and power has risen by 22bhp to 253bhp, yet both fuel economy and emissions are improved. The cabin is plush and well built with gadgets galore, too.

Along smooth roads, the ride is comfortable – but the set-up is far too rigid for a big SUV. It’s hard to think of the Nissan tackling anything more challenging than a speed bump. The steering doesn’t provide enough feedback, either, and the CVT box is frustrating. So, there are better-driving diesel alternatives on the market.