New look means 350Z-powered SUV is bolder than ever. 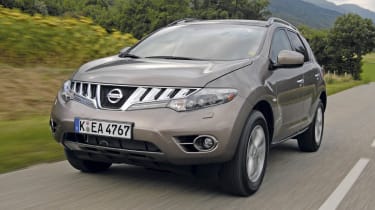 Nissan has tried to offer enough creature comforts and gadgets to make the Murano a real contender. Yet without a more frugal and sensible diesel option, it won’t succeed in the UK. The ride and handling could be better, as could the car’s off-road ability. It’s still a distinctive choice, but until the company addresses its shortcomings, it can’t expect to tempt buyers.

Standing out from the crowd has always been the Nissan Murano’s strength. With a bold shape and eye-catching details, the SUV’s looks have made up for some dynamic shortcomings.

Now Nissan has refreshed the package with a promise that this model will have the substance to back its style. At the front there’s a fresh grille and headlamps, while the rear gets Qashqai-influenced tail-lights and a more defined screen. A sloping roof, jutting side skirts and wheelarches make the Murano more modern and aggressive.

Nissan has also reworked things inside, introducing plush leather trim, a plethora of wheel-mounted controls and more gizmos than ever.

Mechanically, it’s a case of evolution, not revolution. The V6 petrol engine from the 350Z coupé remains, although it now boasts an extra 22bhp and five per cent more torque. Despite this, CO2 emissions and fuel economy are claimed to be improved – but at 261g/km and 25.9mpg respectively, both figures are still woeful.

The Murano also packs a few new gadgets, in the form of a powered tailgate, a remote control seat folding mechanism and a pair of parking assist cameras – one for the rear and, ingeniously, one that points at the offside front wheel.

Yet the newcomer can’t quite cut it on the move. The suspension is too hard for all but the smoothest of roads and the gearbox is neither smooth nor responsive.

Although the engine makes a pleasing snarl, it feels short on power, while the steering is devoid of feel and feedback.

Within the next two years, there is the prospect of a diesel – and this would address the Murano’s high fuel consumption. For now, even though it comes with an impressive array of gadgets and looks the part, the car doesn’t convince either as a sporty SUV or a capable off-roader.