Nissan's luxury SUV gets given a new lease of life thanks to a gutsy 2.5-litre diesel engine and styling revamp. 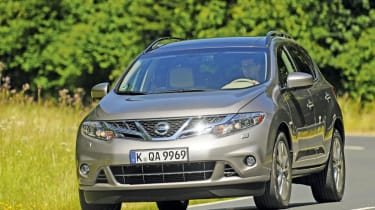 The Murano finally has a diesel engine. The oil-burner is not only 40 per cent more economical than the V6 petrol, it’s more relaxing to drive, too. What’s more, it comes with a proper automatic gearbox rather than a CVT. The Murano is still striking to look at and well equipped, so is a leftfield alternative to European rivals.

If you’re after upmarket family transport, but prefer a bit less space and a bit more style, how about Nissan’s Murano?

Since it first went on sale in 2005, the flagship SUV hasn’t exactly been a big hit for the Japanese firm in the UK. While its smaller crossover brother, the Qashqai, has scored a bullseye with a great range of economical engines, the Murano hasn’t attracted many customers.

This is down to a thirsty V6 petrol unit, mated to an unrefined CVT automatic transmission. Thankfully, Nissan has addressed these areas with a revised model, and the Murano is now the car the company should have launched in the first place. In comes a new 175bhp 2.5-litre four-cylinder turbodiesel engine, which is hooked up to a fresh six-speed automatic gearbox.

On the move, the oil-burner is smooth, reasonably quiet and capable of returning 35.3mpg. While this is hardly class-leading economy – Audi’s 170bhp 2.0-litre TDI-engined Q5 posts 45.6mpg by comparison – it’s still almost 10mpg up on the petrol, which is the important thing.

Ignore Nissan’s performance statistics, though. At 10.5 seconds, the diesel is two-and-a-half seconds slower to 62mph than the V6 petrol. But in the real world it certainly doesn’t feel it.

Thanks to a storming 450Nm of torque, the diesel has better mid-range shove, while the new six-speed automatic gearbox delivers better response and refinement than the CVT transmission. Also, the new powertrain is more relaxing when you are just cruising, too.

As for the rest of the Murano? Well, with Nissan’s ALL MODE 4x4 system it feels stable in slippery conditions, and is generally good to drive with tidy body control, if not much involvement.

What’s more, the design still looks quite striking, and is backed up by a classy cabin with standard leather upholstery, satellite navigation and ambient lighting.

New features include a side and rear parking camera – thanks to the addition of a lens under the passenger door mirror. It’s still not a class leader, but the Murano has made some huge leaps forward.

Rival: Audi Q5 Brilliant diesels, superb build quality and an unrivalled image. It’s good to drive (as it’s based on the A4), but it’s slightly smaller than the Nissan and could be costly if you start adding options.