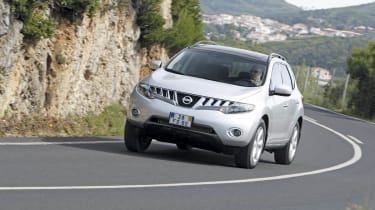 The Murano is an original-looking SUV offering car-like performance and a good spec. When it goes on sale in the UK, it should also ride and handle competently, allowing occupants to enjoy the Nissan’s interior fit and finish. However, the lack of a diesel option seriously hampers the model’s appeal, and despite the generous standard kit, the controversial looks and thirsty V6 may mean the Murano remains a rare sight on UK roads.

Nissan’s quirky Murano didn’t take long to cause a stir among 4x4 fans when it appeared in the UK in 2005. It was good to drive and distinctive to look at, and comparisons with models such as the BMW X5 quickly followed its low-key launch.

With UK imports carefully controlled by Nissan, sales so far have been modest – yet all that is set to change with the second-generation model. It will not only be more widely available than its predecessor, but also aims to step up the appeal that made the original car so distinctive.

Despite the visual similarities bet­ween the newcomer and the current model, every body panel is new. Up front, there’s an eye-catching slanted chrome grille with a bigger Nissan badge and intricate headlights. At the rear, the hatch retains its trademark lines, while the tail-lamps have been upgraded to LED units that resemble those on the smaller Qashqai.

Inside, the cabin has a new look and a better-quality feel. The revised dials glow with a soothing blue and red light, and the buttons on the thin-rimmed wheel are more user-friendly.

The centre console is also much improved, and the seats now offer increased lateral support and overall comfort. Under the sculpted bonnet, the 3.5-litre V6 is still the only engine option, albeit tuned to 265bhp – up 24bhp over the original model. Torque output also rises by 7Nm to 336Nm. Power is fed to the 4x4 system via a revised CVT box, with drive biased towards the front wheels in normal use. Lose traction, and up to 50 per cent of torque is sent to the rear.

Our car was in US specification, as the UK version won’t be unveiled until the British Motor Show in July. It will go on sale in October. On the road, there is still more work to be done on the Murano’s handling. Body roll and dive under braking are both pronounced, although Nissan says the suspension will be stiffened by 10 per cent before the model arrives here.

Of more concern is the CVT gearbox. It blunts the responses of the V6 and causes the unit to rev higher than it would with a conventional auto.

What’s more, while the engine sounds good, the marked intrusion of wind noise at speed, combined with the Murano’s lack of sound-proofing, means refinement is compromised.

On the plus side, the Nissan offers a typical high SUV driving position and it’s surprisingly practical, too. There’s plenty of interior space and useful features such as an optional powered tailgate and folding rear bench, which returns to its upright position at the touch of a button.

However, with no diesel engine option, economy is less than 25mpg on the combined cycle while the CO2 emissions are up to 300g/km. Couple those figures with an expected asking price of around £31,000, and the sums for the Murano don’t add up.

Rival: Lexus RX350 IF it’s luxury you’re after, then the Lexus has the Nissan well and truly beaten. The RX350 also has a 3.5-litre V6, but this is mated to a regular auto, ensuring extremely high levels of refinement. It is a well equipped, comfortable and practical ownership proposition. 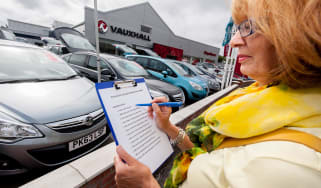