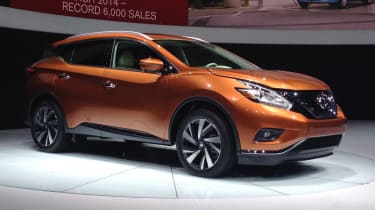 An all-new Nissan Murano SUV was unveiled at this year's New York Motor Show with Nissan boss Andy Palmer telling Auto Express that the car is likely to come to Europe with hybrid power.

The new Murano will top Nissans SUV range sitting above Juke, Qashqai and X-Trail with prices likely to start close to £35,000. Palmer told us that the Murano would be “an important car for Nissan in Europe” with hi-tech features and a high quality interior.

In addition to the hybrid models, a new diesel is also likely to be offered, with Renault’s new twin-turbo 1.6-litre Energy dCi engine a likely fit. This new 158bhp engine with 380Nm of torque will combine with a weight saving of around 60kg over the old Murano to provide competitive mpg and CO2 figures.

The new model was previewed by 2013’s Resonance concept car and, according to Palmer, previews a new design direction for Nissan. The V-motion front end features an over-sized front grille that flows into the bonnet, while the signature boomerang LED front lights are similar to those on the Qashqai and X-Trail. 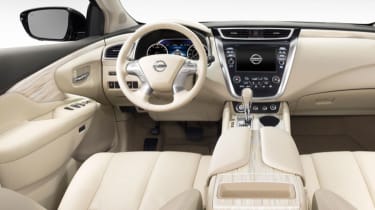 At the side, sweeping curves and bulging wheelarches sit alongside a rising waistline, while the floating roof is also set to become a Nissan design feature.

Inside, Nissan refers to a ‘social lounge interior’ with an 8-inch touchscreen used to declutter the dash, and a 7-inch high-def colour screen replacing the traditional instrument cluster. The panoramic sunroof is said to be the largest in its class, while NASA inspired seats are designed to minimise muscular strain.

Production of the Murano will be moved to Nissan’s factory in Mississippi with the car due to be exported to 100 markets around the world. Although Nissan hasn’t officially confirmed that the car will come to Europe, we expect to see it in Nissan showrooms some time in 2015.