Peugeot opens the door on tech secrets of the e-Legend EV, which starred at last year’s Paris Motor Show

Concept cars are often an effective way for manufacturers to demonstrate their design and technological know-how. That glimpse into the future is often short-lived, but one concept car that appeared at the 2018 Paris Motor Show and has continued to attract interest is the Peugeot e-Legend.

“We thought the reaction would be positive, but it was surprising to see such an interest in the car,” Philippe-Emmanuel Jean, Peugeot’s brand planning manager, told Auto Express, as we were invited to take an in-depth look at the concept in Paris.

Such was the interest in the e-Legend that an online petition was started to try and persuade Peugeot bosses to put the car into production. So far it has attracted almost 60,000 signatures, and even the firm’s CEO has admitted that, if it reaches 500,000, the company will have to consider building it. 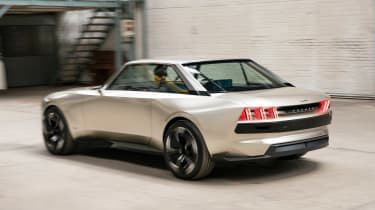 For now the hand-built, carbon fibre e-Legend remains a one-off, created to demonstrate the French firm’s commitment to EVs and autonomous technology. But as well as looking into the future, Peugeot has also looked at its history and used the 504 Coupé as an inspiration for the design.

“It’s important to work on something compact and realistic – what Peugeot will be in the future,” Jean added. “It won’t go into production, but elements of the design and technology will appear in the future.”

The powertrain of the e-Legend is one aspect that does have real-world potential; beneath the floor of the car sits a 100kWh battery, twice the size of that in the new e-208 supermini, and good for 370 miles on a single charge. This powers electric motors on each axle that make a combined 456bhp, and Peugeot claims that 0-62mph takes less than four seconds. 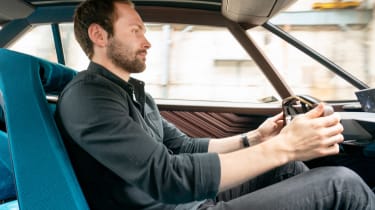 The e-Legend is a fully working concept, as you can see in our pictures, but it’s a priceless one-off, so it’s restricted to fairly limited use. However, getting behind the wheel did allow us to soak up the intricate cabin architecture and design details.

The doors are touch-sensitive and open automatically by placing your finger on the B-pillar. Inside, a sea of blue velour trim and myriad digital displays welcome you. One of the first things you notice is the amount of space. Because the e-Legend is electric, there’s no mechanical intrusion into the cabin, and the front footwells stretch out into the space usually reserved for the engine.

The central touchpad that sprouts out between the front seats is the gateway to all of the car’s functionality, including Level 4 autonomous tech. Selecting the latter sees the theatrics of the entire dash rise up and the steering wheel retract into it, as if it were never there. The pedals also recede into the floor to create even more foot space.

A huge 49-inch display sits in the footwell where driver and passenger can watch a movie, check social media or even play arcade games. But if your passenger wants to do something else, there are digital screens in place of traditional sun visors.

Few concept cars have created a reaction like the e-Legend. It’s almost certain that we’ll see more of its technology put into production before any of its design. But if enough people sign the petition Peugeot’s hand could be forced...

Would you like to see the Peugeot e-Legend make production? Let us know below...