We drive the Peugeot 2008 on UK roads for the first time, as the all-new Juke rival arrives in showrooms 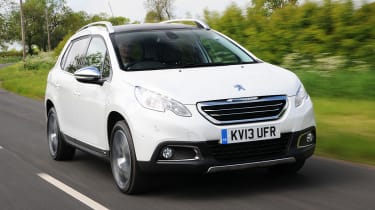 There's still no outstanding supermini-SUV, but they all offer something distinctly different. The Peugeot’s strengths are its upmarket feel, impressive refinement and low running costs. It has its downsides, but so do the Nissan Juke, Renault Captur and Skoda Yeti. In its own way, the 2008 is as worthy of your money as each of its rivals.

The Nissan Juke has been one of Britain’s top 10 best-selling new cars this year, but it faces a severe threat from the new Peugeot 2008, which has just landed in the UK.

For starters, the 113bhp 1.6-litre turbodiesel tested here is the cleanest car in the class, emitting 105g/km of CO2 and returning 70.6mpg economy.

The Peugeot also has a large 360-litre boot – more than 100 litres up on the Juke’s – and a starting price of £12,995. That’ll interest anyone considering Nissan’s baby crossover, which starts at exactly the same price.

As soon as you slide behind the wheel of the 2008, you feel as though you’ve climbed into a tall SUV, with more room inside than you’d expect from a car with such a small footprint. However, that’s partly down to the large sunroof, which is standard on the top-spec Feline model we drove.

There’s not too much diesel rattle from the 1.6-litre engine, and its 10.4-second 0-62mph time feels surprisingly quick. Refinement is a cut above for this class, with a muted engine note and impressively low wind noise at motorway speeds.

The cabin of our top-spec car has plenty of premium touches, too, such as subtle blue LED lighting around the dials and embedded around the edges of the sunroof. Plus, the satin chrome, gloss black and soft-touch plastics all help make the interior feel special.

Questions remain over build quality, though – our car’s central storage compartment lid broke when someone leaned on it. And while we were impressed by the 2008’s grown-up feel, it falls short on fun. That high-riding feeling you get when you step in the cabin works against the 2008 through bends, where it feels more top-heavy than the likes of the Juke. The body doesn’t necessarily roll around that much, but the new car doesn’t corner with the immediacy of the Juke, and the steering could do with a bit more feedback.

On the whole, the 2008 rides well, but over slightly rough roads too much vibration makes its way into the cabin. Still, that could be due to the All-Weather tyres fitted on Allure and Feline models in conjunction with the Grip Control system – a set-up that helps traction on slippery surfaces in the front-wheel-drive-only Peugeot.

The 2008 offers a different proposition from its rivals, with a focus on refinement, and a premium feel where others go for more style and sportiness. It’s not good enough to be called the best in class, but then none of the current crop of supermini-SUVs really stands head and shoulders above the rest. Yet if the Juke is too small for you and the Skoda Yeti too bland, the 2008 is certainly worth your consideration.