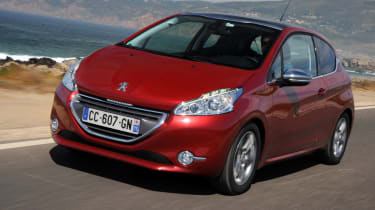 There is no doubting the 208’s showroom appeal. It’s certainly the prettiest supermini on the market and feels like a far more grown-up product inside. If you bought our Allure-trimmed test car you could not want for more equipment, either. Sadly, its 120bhp 1.6-litre engine doesn’t come up to the same standard; nor does the ride or the way it goes around corners. The 208 is good but it deserves a better driving experience. If it were our own money, we’d buy the more fun Ford Fiesta Zetec S instead, or the more comfortable VW Polo 1.2 TSI SEL.

Buyers in the UK have always taken small Peugeots to their hearts. Models like the 205, 206 and 207 have sold in their thousands thanks to a combination of good looks, lively road manners and great value for money.
But they’ve never felt very upmarket – which is where the new 208 should score. Learning lessons from the larger 508, it’s meant to be much more grown up, with a cabin that promises to rival premium-badged cars like the Audi A1.

First impressions? Peugeot has created another very pretty supermini. If you remember the SR1 concept car from the 2010 Geneva Motor Show, you’ll see its influence in the front grille, headlights – which have LED running lights – and the bold line on the doors.
The 208 is slightly smaller than the 207, but with the same wheelbase and redesigned seats it’s a bit more spacious, while the boot has grown by 15 litres to 285 litres. The interior is superb. With a tactile mix of metal, leather and piano black plastics, it’s a really upmarket environment that beats a Ford Fiesta and is worthy of comparison with the Audi A1 and the VW Polo.
Our Allure-trimmed test car had dual-zone air-con, a USB port for MP3 players, cruise control and a great a seven-inch touchscreen display, which incorporates Bluetooth and a series of bespoke apps, including a petrol station locator and another that directs you to the nearest Michelin-starred restaurant.
Perhaps the most controversial element of the cabin, though, is its raised dials, which sit higher on the dashboard. This is meant to make them easier to read, but with the steering adjusted for a driver over 6ft tall and one around 5ft 8in, the wheel obscured the bottom half of the dials on both occasions.
Apart from a slightly high seat, the driving position is generally okay as the steering wheel adjusts for reach and rake, although you can find yourself peering round the windscreen pillars to line the car up when cornering or at T-junctions.
We’ve already tested both the 92bhp 1.6-litre e-HDi diesel and the top-spec 155bhp 1.6 turbo petrol – now it’s the turn of the expected best seller, the 120bhp normally aspirated 1.6-litre petrol, hooked up to a five-speed manual gearbox.
With a claimed 0-62mph time of just under 10 seconds, the engine isn’t full of shove, but it’s got enough power for most buyers. What it lacks is the kind of low rev urge we’ve been used to from small capacity turbos such as the VW Polo 1.2 TSI and, with peak torque of 160Nm not arriving until 4,250rpm, the engine needs revving hard when overtaking.
Sadly it’s not particularly smooth and can get quite noisy at high revs. On the motorway, there’s not much wind or road noise, but the engine desperately needs a sixth gear – 70mph in fifth has it spinning at a boomy 3,500rpm. The gearbox also has a loose, vague shift and a long throw.
There’s good news when it comes to fuel economy with Peugeot claiming almost 50mpg despite the lack of a stop-start system and, although CO2 emissions of 134g/km are nothing to write home about these days, they are a match for the similarly priced and just as powerful Ford Fiesta 1.6 Zetec S.
Where the 208 isn’t a match for the Fiesta is the way it rides and handles. Peugeot says it has given the 208 a smaller steering wheel to give it a sporty feel – but we reckon it needs to do more than that. Yes, the car certainly darts into bends, but the steering is quite light and doesn’t have much feedback.
What’s more, even though our test car weighed a staggering 165kg less than its predecessor, an unresolved suspension set-up tempered its extra agility. There’s quite a lot of body roll and while the ride is quite firm yet compliant over large undulations, the springs and dampers don’t cope with bumps very well – you can feel and hear the thud over a pothole much more than you can in the 208’s rivals.
Which is a bit of a shame. The 208 is great to look at, has a fantastic cabin and remains great value for money. For those reasons alone, it’ll continue to be a hit with UK buyers. But it could have been even better.
Share this on TwitterShare this on FacebookEmail