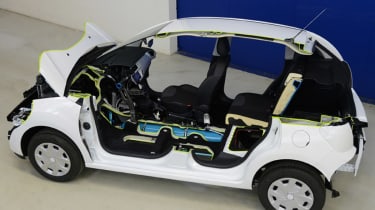 The hybrid system - which is called Hybrid Air - combines a conventional petrol engine and automatic gearbox with a hydraulic pump and motor that are powered by compressed air.

In the setup shown in a current Citroen C3, the engine, transmission, pump and motor are located in the engine bay, while the compressed air is stored in a tank that runs between the front seats.

The Hybrid Air system can operate in zero emissions air mode, where compressed air is used to drive the hydraulic motor, which then turns the transmission and thus the front wheels. It can also operate in petrol-engine-only mode, or petrol and air in combination.

Like a current petrol-electric hybrid, the drivetrain is electronically controlled and automatically selects the power source most appropriate to the driving conditions. The compressed air tank is refilled by the hydraulic pump under deceleration or braking.

The petrol-compressed air hybrid system will make its debut in a B-segment car in 2016 and, if used in the current Peugeot 208 or Citroen C3, the powertrain returns 97.4mpg and CO2 emissions of 69g/km.

PSA Peugeot Citroen claims that the Hybrid Air drivetrain offers a 45 per cent improvement in fuel economy in urban driving over a conventional petrol engine, thanks to the fact that the air system powers the car between 60 and 80 per cent of the time at speeds below 43mph.

The firm also claims that the Hybrid Air system can extend a car’s range by up to 90 per cent, and gives overall fuel savings of around 35 per cent.

PSA Peugeot Citroen also showed its new EMP2 platform. Short for Efficient Modular Platform 2 and similar in concept to the VW Group’s new MQB setup, the new underpinnings can be used for hatchback, saloon, coupe, convertible, estate, MPV and SUV bodystyles. The C and D-segment platform is set to be used for around 50 per cent of PSA’s cars, but will be used first for the new Citroen C4 Picasso and Peugeot 308.

PSA claims that the new EMP2 is up to 70kg lighter than the platforms it replaces, and will help to cut CO2 emissions by up to 22 per cent.