Can superb practicality outweigh controversial looks to help French car get ahead? 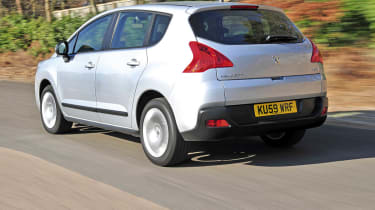 3
Buy used for less at Buyacar

WHEN it comes to niche models, Peugeot hasn’t had a great track record in recent years. The 1007 city car has failed to set the sales charts alight and the 4007 SUV is little more than a rebadged Mitsubishi Outlander. So the 3008 promises to be the best ‘double-0’ model yet. It has already gone up against conventional compact MPVs (Issue 1,077) – but this is where bosses expect the newcomer to excel.

Unfortunately, it is fighting with one hand tied behind its back, because from the start our testers thought the 3008’s challenging appearance was a turn-off. With its gaping grille and unusual headlamps, it attracts attention for all the wrong reasons. It seems heavy in profile, lacks the grace of the firm’s new RCZ coupé and doesn’t even wear alloy wheels as standard (ours were a £410 option).

On the inside it’s easy to see where the designers searched for inspiration. The wraparound dashboard appears to borrow heavily from the Audi R8 supercar, which means it looks good. But the materials don’t match the quality of the ix35’s. The 3008 represents an improvement on Peugeot’s usual fare, yet the Hyundai and Skoda are more attractive and the Nissan feels better built. And if you opt for Active trim, you won’t exactly be overwhelmed with kit – it’s the only car here without rear parking sensors as standard.

Where the 3008 scores is on practicality. For a start it has the biggest boot on test, while its two-piece Range Rover-inspired split tailgate doubles as a handy bench. This makes loading big objects really easy, and the well devised luggage area also incorporates a simple moveable boot floor. The latter can be raised or lowered to provide a completely flat surface when you fold the rear seats down, or used as a horizontal divider to boost storage space.

Neat touches include levers at the side of the load area to help you fold the seats, while the rear passenger floor is flat, making the Peugeot the best choice if you regularly need to carry three passengers in the back. However, niggling cost-cutting measures abound. The tiny glovebox is compromised by the fusebox – which hasn’t swapped sides in the car’s transition to right-hand drive – and the lid for the centre cubby hinges the wrong way for UK buyers.

Hit the tarmac and the 3008 continues to perplex. Although it features the softest suspension set-up of any of the cars on test, you can still feel all the bumps in the road surface. And our Active model does without the Dynamic Roll Control set-up – which is fitted to higher-specification variants – so body movements are poorly controlled, making the Peugeot less enjoyable to drive. On twisty rural roads, the steering is too light and vague to inspire confidence, plus it has an unnaturally strong self-centring feel. To compound all this, grip levels are compromised by the 3008’s energy-saving tyres.

There’s little wrong with the engine, though. The 1.6-litre HDi diesel provides decent performance, and while it couldn’t match the more powerful Hyundai against the clock in our tests, it was more responsive than its rivals during our in-gear trials.

The small unit also provides decent emissions in this company – only the Nissan is less polluting – although our fuel return of 36.9mpg is nothing to write home about. At £18,095, the Peugeot is the second most expensive choice, too, but it is enormously practical.

Chart position: 4WHY: We’ve already tested the 3008 against a range of MPVs, but Peugeot expects the car to really perform in the crossover sector. So, we see if it can keep up with its rivals.