Does company’s first-ever crossover leap straight to top of the class? 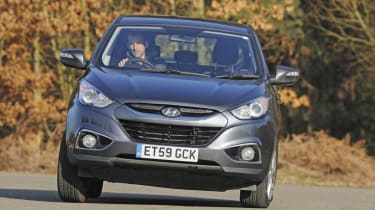 5
Buy used for less at Buyacar

Korean giant Hyundai should know a thing or two about what makes a good crossover. The Santa Fe is an established presence in the compact SUV sector, and the company’s smaller Tucson already provides the looks of an off-roader with family car running costs.

From the outside, the new ix35 makes a strong impression. It looks best when viewed head-on, where its Ford S-MAX-inspired nose gives a sporty appearance.

Sharp creases along the flanks can’t disguise the Hyundai’s bulk in profile, though, and it can’t match the off-road style of the Skoda or the sleek design of the Nissan. But it trumps the unconventional Peugeot for driveway appeal.

On the inside, the ix35 is even more successful. Its attractive layout and excellent finish signify a major step up in quality from the brand. It looks and feels like a mainstream European model on the inside, and only the Skoda has more of a premium air.

The Hyundai’s flimsy indicator stalks are the only below par element, but they’re hardly likely to offend. Plus, there’s plenty of kit to play with. Even in entry-level Style trim, the ix35 has heated front and rear seats as standard, as well as Bluetooth connectivity and parking sensors.

Rear space is adequate and the back seats were the most supportive and comfortable in our line-up. But the newcomer falls short when it comes to versatility. Its simple folding rear seats don’t lie flat, while the boot lacks the novel storage solutions found in other models.

For example, you don’t get an adjustable boot floor like in the Peugeot, or a variety of load restraints like the Skoda. In terms of pure space, the 465-litre boot is reasonable enough, yet there’s a high load lip and it’s the smallest when you fold the rear seats.

The Hyundai struggles at the back, but it leads the way under the bonnet – as its 134bhp diesel engine is by far the most powerful. Look at the torque outputs of our four contenders, and the ix35 is even more appealing. It has a huge 320Nm at its disposal, which means a 70Nm advantage over its closest competitor.

The extra shove is obvious from behind the wheel, and the Hyundai accelerated from 0-60mph in 9.5 seconds – more than two seconds quicker than any of its rivals. The powerplant is also strong and smooth, with plenty of performance in reserve when cruising on the motorway.

At lower speeds, the torquey engine and short first gear can make for untidy getaways, as the front tyres scrabble for grip if you accelerate hard from a standstill. Soft suspension doesn’t help here, but it does make the Hyundai one of the most comfortable cars on test. The trade-off comes on twisty roads – where the ix35 lacks the sharp body control of the Skoda or Nissan – and under heavy braking, as the body squirms about nervously.

The ix35 was also the only car that needed more than 50 metres to come to a halt from 70mph – it recorded a distance of 51.3 metres. Light steering and a positive gearshift round off a dynamic package that has more in common with an SUV than a conventional hatchback.

To help improve fuel economy, the ix35 features a gearshift indicator similar to that found in the Yeti, but in reality this is a token gesture. In our hands, the powerful Hyundai was the thirstiest choice of this group. It returned only 32.7mpg – some distance behind the 40.7mpg achieved by the Skoda. It also emitted the most CO2, at 147g/km, although from 1 April, the car will cost private owners only £15 a year more in road tax than its competitors. Company drivers are worse affected, because while the Hyundai’s £17,995 list price is cheaper than all but the Yeti, it has the highest tax liability for business users.

By way of compensation, models from the brand are good to own. Hyundai is a consistently strong performer in our Driver Power satisfaction surveys, and the ix35 has an excellent five-year warranty.

A tempting price tag and the strongest engine in our line-up make the new car another extremely capable Hyundai. If it provided more dynamic polish, versatility and space in the back, it would be a serious contender for overall class honours.

Chart position: 3WHY: Hyundai’s star has been on the rise, but is the new ix35 a stellar crossover? Or is the firm’s meteoric performance beginning to slow? There’s only one way to find out...