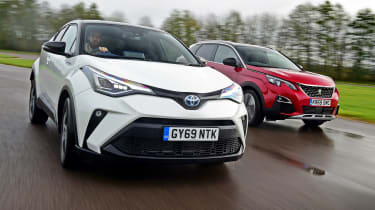 The Toyota C-HR has been a solid performer in the compact-SUV class, but the Japanese firm hasn’t been resting on its laurels. For 2020, Toyota has introduced a new infotainment system to the C-HR, while the old car’s 1.2-litre turbo petrol engine has been replaced by the 2.0-litre hybrid powertrain first seen in the Corolla hatchback. These updates should boost the C-HR’s appeal, so we’re testing it here against one of its key rivals, the Peugeot 3008.

The two cars have different approaches, though. The Toyota is now exclusively sold as a hybrid with a sporty-looking body, while the 3008 has traditional petrol and diesel engines, but offers an eye-catching interior design.

Buyers in this market are after a compact SUV with a wide range of ability, though, so here we’ll find out which model is best at bringing together practicality, performance, comfort, equipment and efficiency. 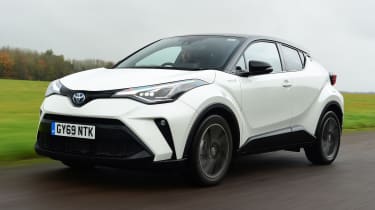 The 2.0-litre Toyota C-HR hybrid isn’t simply the 1.8-litre version with a larger petrol engine bolted into place. Higher thermal efficiency makes the most of the fuel that goes in, and new battery tech boosts economy even further. This really is the headline figure for the C-HR, especially in comparison to the 1.6-litre petrol 3008: we recorded a figure of 44.1mpg when testing the Toyota, while the Peugeot only returned 31.2mpg.

This isn’t the only advantage the Toyota has, because the Japanese car also rides and handles much better than the Peugeot. Its TNGA platform features MacPherson struts at the front and double wishbones at the rear, which is a more complex set-up than the torsion beam used in the 3008.

Its advantages are fully evident when you get behind the wheel, because the C-HR rides very smoothly. It deals with low-speed bumps well and it’s perfect for driving in town – not only because potholes are kept at bay, but also because the electric motor alone drives the car at low speeds, so it’s ultra-quiet. The 2.0-litre engine isn’t as subdued as the 1.8 when it kicks in to charge the batteries, but it’s still quieter than the 1.6 in the 3008. Get up to speed and the suspension is even more impressive, dealing with mid-corner bumps well and keeping the car composed on fast roads. 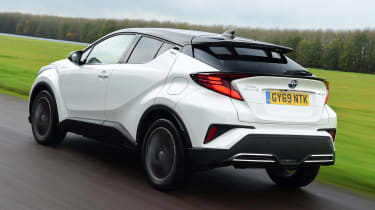 The C-HR is one of the best-handling cars in its class, with well weighted steering, lots of grip and plenty of performance. In our tests the Toyota went from 0-60mph in 8.1 seconds, which was the same as the 3008. However, the C-HR’s electric motor means it feels more responsive at lower speeds, while the Peugeot feels quicker at higher speeds.

The C-HR uses a CVT gearbox, so it’s not possible to record in-gear figures. It went from 30-50mph in 3.1 seconds, while the 3008 took 2.8 seconds through the gears. The Peugeot was quicker from 30-70mph, too, with a time of 7.3 seconds, compared to the Toyota’s 7.7 seconds. While the two cars are closely matched for performance, the Toyota is much more composed, comfortable and refined, so the driving experience is ahead of its French rival’s. 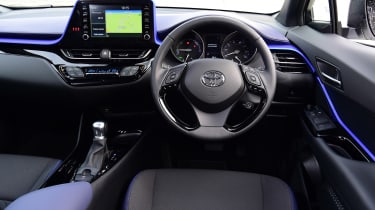 The other significant change for 2020 is the addition of Apple CarPlay and Android Auto to the infotainment system. This means you can bypass the built-in system, which is frustrating to use, although the same can be said of the 3008’s. The Toyota can’t match its rival for interior quality; the materials look cheap in places, yet build quality is excellent. 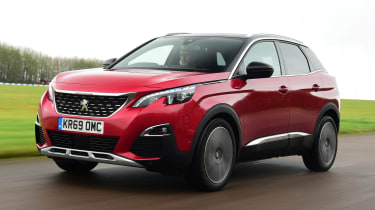 For: Superb cabin, good performance, practical interior.Against: Poor economy, neither as good to drive nor as comfortable as its rival.

The Peugeot 3008 uses the PSA Group’s EMP2 architecture, with MacPherson struts at the front and a torsion beam rear axle, which is a simpler and cheaper set-up than its rival here.

The 3008 is mostly comfortable, though, keeping smaller imperfections away from the cabin and coping with big undulations on the motorway, too. However, the suspension doesn’t cope with potholes and larger bumps, because they crash into the cabin and upset the car’s balance. This is especially true while cornering, since the soft set-up has some body roll, yet mid corner-bumps cause it to hop in a way that the C-HR never does.

The small steering wheel is part of the Peugeot’s i-Cockpit cabin set-up, which means it’s harder for the driver to make small, precise movements. It’s less comfortable than the Toyota, yet also not as much fun, because the 3008 never feels fully at home in anything but a straight line. 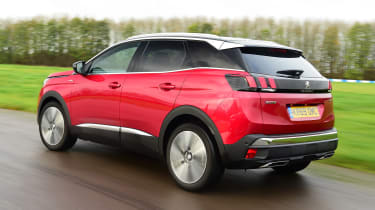 Speaking of which, this 1.6-litre model delivered decent performance in our acceleration tests. It went from 0-60mph in 8.1 seconds, the same as its rival, but it was quicker elsewhere. For example, it took 2.8 seconds to go from 30-50mph through the gears, and 4.4 seconds from 50-70mph. The Toyota took 3.1 and 4.6 seconds respectively in those tests.

Unfortunately, while the PureTech engine is relatively refined, we prefer other versions of the 3008. In Sport mode, accessed via a button on the centre console, the car plays an unpleasant fake exhaust note through the speakers, but the driving experience barely changes. The engine isn’t fun to use, so offers no benefit over the hybrid powertrain in the Toyota, which is quieter and more efficient.

The 3008’s eight-speed auto is slow-witted, but smooth enough when driving in a relaxed way. It keeps engine noise at bay more than the CVT in the Toyota, but overall the C-HR’s powertrain is better for calm driving because it’s quieter and smoother. 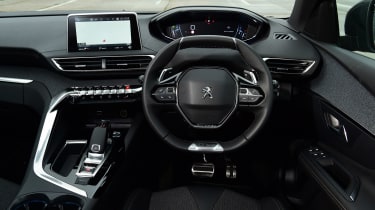 The 3008’s real strong point is its interior. There are some cheaper plastics dotted around, but in the most commonly touched areas it feels like a premium product, especially the textile that runs across the doors and dash – it’s superb.

The i-Cockpit set-up features a 12.3-inch digital display in front of the driver and an eight-inch dashboard-mounted touchscreen. It has sat-nav, Android Auto and Apple CarPlay, climate and cruise control and a reversing camera as standard, so the only thing that grates about the interior of the Peugeot is that tiny steering wheel. You can get used to it, but why should you when the Toyota’s driving position is so much better? 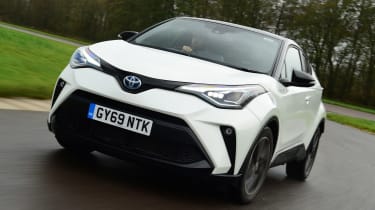 The Toyota C-HR is a better car in many core areas than the 3008. While its more limited practicality is still an issue, the C-HR’s updates have improved on its infotainment, it’s still better to drive, quieter and more efficient than its rival here, and it offers better value for money. 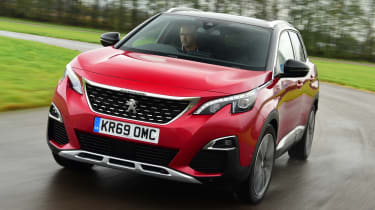 Poor fuel economy, a harsh ride and a disappointing powertrain place the 3008 second here. Other versions, such as the diesel or 1.2-litre petrol, are much better. Go for one of these models, and the Peugeot is still among the best in its class, thanks in part to its stunning interior.